In A Lonely Place by Dorothy B. Hughes 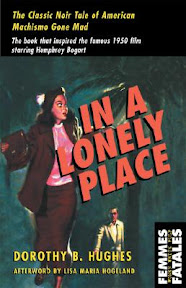 In A Lonely Place by Dorothy B. Hughes
Femmes Fatales, 1947
Suspense/Thriller; 250 pgs

First Sentence: It was good standing there on the promontory overlooking the evening sea, the fog lifting itself like gauzy veils to touch his face.

Reason for Reading: I am sure this book was recommended by one of the author’s I heard speak at the Los Angeles Times Festival of Books in 2006, however, I forgot to write it down. I do know that I walked away from the festival that April with a copy of the book, both my husband and I interested in reading it.

Comments: In A Lonely Place is purported as author Dorothy B. Hughes best novel, a hardboiled noir set in postwar Los Angeles. Dix Steele is cocky and sure of himself as the novel begins. Although written in third person, the author never strays from the main character’s point of view as the world and the events in the novel filter solely through his viewpoint. He makes for an interesting protagonist, although never a likeable one. It is obvious from the first page he does not think much of women. Instead, sharp-eyed psychologist Sylvia Nicolai and the fiery Laurel Gray, who knows exactly what she wants and goes after it without hesitation, are the two characters who stand out and demand respect from readers. Dix falls hard for the beautiful Laurel Gray, a woman unlike any other he has come across before. She may just be his match and what follows is not at all what Dix could have anticipated.

Sylvia’s husband is none other than Detective Nicolai, Dix’s best friend. His latest case is tracking down a killer known as the Strangler who has left a string of female victims in his wake. Dix takes particular interest in the investigation.

For those who do not care for reading violent scenes, the novel is not at all graphic and instead is more psychological in its approach. Dorothy B. Hughes capably builds suspense and wonder throughout her novel. I cannot say that this particular novel stands out above some of the other serial killer novels of its kind I have read. Although cold and calculated, the killer was never really frightening as a character. Perhaps that in part was because the author did paint the killer as a somewhat sympathetic person. The murderer was smart, no doubt, but overconfidence and rationalization never failed to make the killer seem less so.

In A Lonely Place was an entertaining novel and also made for interesting reading as a period piece. Dorothy B. Hughes’ novel stepped outside of the lines during its day, offering up strong willed and intelligent women and challenging the societal notion that women shared the blame in their victimization. Dorothy B. Hughes certainly earned the high praise her book has received.

Favorite Part: Sylvia’s character most intrigued me, and I almost wish the author could have shone a light on her a little more. However, the novel would not have been quite so effective otherwise.

Miscellaneous: In A Lonely Place may be better known for the 1950 movie version starring Humphrey Bogart as Dix Steele. As often happens, movies are not exact reflections of the books they are based on, and, in this case, the movie definitely takes the story in a different direction than the novel takes the reader.
Posted by Literary Feline at 12/22/2007 05:00:00 AM