The Somnambulist by Jonathan Barnes 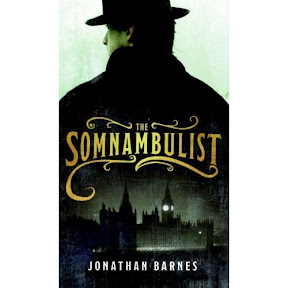 The Somnambulist by Jonathan Barnes
William Morrow, 2008 (ARE)
Fiction; 353 pgs


First Two Sentences: Be warned. This book has no literary merit whatsoever.

Reason for Reading: This was a Harper Collins selection I was chosen to review through the publisher’s First Look Program. The description of the book intrigued me, and so I thought I would give it a try.

From the Publisher: The Somnambulist follows the extraordinary tale of Edward Moon, stage magician and detective, and his silent sidekick the somnambulist. A bizarre series of murders unsettles turn-of-the-century London, but as Moon begins to investigate, he realizes it is only the beginning: nourished by blood and poetry, an eerie uprising grows among the very roots of the city.

Comments: The first paragraph of the novel instantly had my attention. I knew I was in for something different. It is difficult to describe a book like this. It isn’t quite what one might expect from the description offered by the publisher. It certainly is a bit of a detective story, but it also flows over into the macabre and fantastic.

Edward Moon, stage magician and detective, is bored of doing magic tricks and reading minds. He has not faced a memorable foe in a very long time, and so even while he pretends to be quite reluctant, he agrees to help the police solve a rather unusual and gruesome murder. What unfolds is a dark and magical tale, one fraught with horrors and conspiracy galore.

The characters lean toward bizarre and unbelievable, just as the narrator warns readers at the beginning of the book. Of course, this is what makes them all the more interesting. There is the albino, Skimpole, who nobody seem to like; the ugly man, Thomas Cribb, who is knows much more than he is able to say; the giant, milk guzzling Somnambulist who does not speak; Miss Grossmith, the ever faithful housekeeper; Barabbas the Fiend, who is quite crazed while still brilliant; Mrs. Puggsley, the brothel madam, who serves a clientele with rather special tastes; and Edward Moon, who is past his prime but is not quite ready to let the world forget him.

The narrator’s voice throughout the book is entertaining to say the least. The narrator, however unreliable, was witty and amusing, even with his asides that sometimes had me rolling my eyes. “I expect by now that your disbelief is not so much suspended as dangling from the highest plateau of credulity.” [p334] And with that quote, I found myself nodding in complete agreement.

Although I take no issue with the choice in narrator and actually think it makes for a more interesting twist to the story, my opinion of the narrator was not so high after learning his true identity. The mystery gone and the motive clear, the narrator seemed rather ordinary. Perhaps that was exactly what the author intended.

The Somnambulist is quirky, dark and utterly entertaining. Jonathan Barnes has written a novel that at times will confound the reader and yet everything comes together in the end in unexpected ways. This was one book in which I never guessed what might happen next.

Favorite Part: Thomas Cribb. I was fascinated by his story and quite intrigued by his life. To say exactly what it was about him that most attracted me to the character would be to give too much away, unfortunately.

Least Favorite Part: I wish I knew more about the poet Samuel Taylor Coleridge. Although knowing nothing about him did not hurt my enjoyment or understanding of events in the book, I do think that knowing more about his life, including his vision of Pantisocracy, might have enhanced my reading experience.
Posted by Literary Feline at 12/03/2007 05:32:00 PM