Silence of the Grave by Arnaldur Indriđason 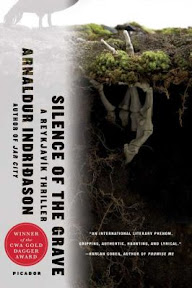 First Sentence: He knew at once it was a human bone, when he took it from the baby who was sitting on the floor chewing it.

Reason for Reading: I was drawn to this book when I first came across the listing of books for review by the website Curled Up With A Good Book. I had not realized it was the second in the series, but I quickly remedied that by searching out the first book, which I reviewed late last month.

Comments: Arnaldur Iridiđason's follow up to his first novel, Jar City, is gripping and emotionally charged. Silence of the Grave touches on subject matter that will pull at the heartstrings, stir up anger, and leave behind a sense of sadness and yet, at the same time, proves to be quite satisfying.

A young boy discovers a bone while playing in an unfinished hillside housing development. His mother is stunned. A fifth year medical student confirms that the bone is a human remain and the police are called out. Inspectors Elínborg and Olí are quick to the scene, followed closely by Inspector Erlendur. Determining that it would be best to handle the scene with care, Olí calls upon an archaeologist to assess the situation and soon a team quickly converges on the scene commence an excavation. The three inspectors are faced with a lot of unanswered questions, and because of the age and lack of information about a possible crime having bee committed, the three are on their own. The bones appear to be several decades old, but the gender and identity remain unknown. There is little doubt that the victim buried in the earth had met with foul play; however, the reasons and exact cause behind the death are not yet known.

As the investigation gets underway, Erlendur is fighting his own personal demons. A panicked call from his estranged daughter forces him to seek her out. He must enter into her world and learn things about her he wished he did not have to know. His search also forces him to look into his own past and the choices he made all those years ago. His doubts and fear surface, and he must decide whether he is ready to face them.

Woven throughout the unfolding investigation is the story of a mother who longs for a good father for her child and instead enters into a nightmare, one that will have a lasting impact on the entire family. It becomes a game of survival both for her and her children. They live in fear everyday.

Although the novel opens with the merriment of a child’s birthday party, it soon spirals down into a much darker place. Violence and shame mark the lives of many of the characters in the author's second book. Arnaldur Iridiđason does not shy away from the intensity of the violence, although he does so in a way that is not heavy handed. Iridiđason is a master at crafting his characters, maintaining a little mystery while at the same time slowly opening a window into their souls. The author captures the emotional terror, pain and doubt his characters endure.

The novel could be set anywhere; the problems and issues that arise in Arnaldur Iridiđason’s book cross all borders. Domestic violence, child abuse and drug use have a profound affect on those it touches, physically and psychologically. Even today, people choose to look away not wanting to get involved or step in to help. And yet, Iceland is the perfect setting with its expansive landscape and ever growing population as it struggles with a myriad of social issues that reveal the out of the shady side of a remarkable culture.

Silence of the Grave is a compelling mystery that carries the reader into the ugly underbelly of Reykjavík and into the countryside with its darkest secrets during a long ago war. The author’s characterizations bring the book to life and make it all the more real. Arnaldur Iridiđason has written a poignant tale that will get under the reader’s skin and leave him or her wanting more. Originally published on Curled Up With A Good Book at www.curledup.com. © Wendy Runyon, 2007

Miscellaneous: The fourth season of The Wire is out on DVD and Anjin and I have already dived in. It's only the best TV shows ever made. We even recently subscribed to HBO so we could finally watch a season when it first airs. And wouldn't you know it, it's the last season. Always my luck.

It has been a rough week in more ways than one. I will not bore you with details, but suffice it to say I am very much looking forward to this weekend. I just have to make it through tomorrow . . .
Posted by Literary Feline at 12/12/2007 05:45:00 PM