Cries and Whiskers by Clea Simon 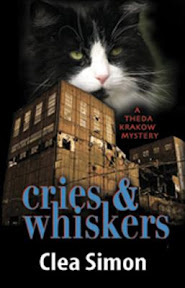 Reason for Reading: Clea Simon was kind enough to send me an advanced reader’s copy of her latest release, Cries and Whiskers. A mystery, a book about cats, and on the recommendation of author and friend Karen E. Olson, I could not say no. Fortunately for me, I didn’t.

This is my first series completion for the Series Challenge. At least until Clea publishes another book in the series.

Comments: There were a lot of things I could have done today. I should have starting putting up the Christmas decorations, which in years past have been up no later than the first of December. I could have got a good start on the laundry. Maybe mopped the kitchen floor. Or given the dog a much needed bath. Instead, I settled in this afternoon to read Clea Simon’s latest, Cries and Whiskers, and before I knew it, I had reached the end.

Cries and Whiskers is the third novel in the Theda Krakow mystery series. Freelance journalist Theda is right at home with the club scene in her hometown of Cambridge. She has a regular gig writing feature articles on local musicians and although it does not bring in as much money as she might like, she enjoys having the steady work while at the same time spending time with her musician friends, the fans and experiencing the music itself. When rumors of a new designer drug making its way on the club circuit reach her, Theda begins to ask questions, thinking perhaps there may be a story there.

Meanwhile, the death of an animal rights activist who had been trying to rescue feral cats before a winter storm hits brings cat lovers Theda and Violet out of bed one morning in an effort to finish the job. The activist who had once disparaged domesticated animals in favor of protecting the rights of wild had not been one of Theda’s favorite people. However, her effort to save the cats from coming to harm is enough for Theda to give her the benefit of the doubt, even after death. Questions involving the death of the activist begin to accumulate and Theda soon finds herself on a mission to get to the truth. The more Theda learns, the more questions she has, as both mysteries touch much closer to home that she would like. Theda finds herself in over her head in more ways than one.

As in the previous novels, the author takes readers onto the club scene for a front row view as well as going behind the scenes. She never fails to capture the excitement and thrill of the experience, as Theda and her friends enjoy the shows. In this latest installment, however, readers are introduced to a darker side of the club scene. Usually a comfortable place for Theda, she suddenly finds her own expectations and ideas in doubt. Theda is a relatively trusting person and that trust is sorely tested in this novel. However, she is no pushover. She has a nose for trouble and is not afraid to uncover it even at its worst.

As I have come to expect with the author’s mysteries, she is not afraid to tackle moral issues. In this instance, along with the topic of drug use, she also takes on the subjects of animal activism verses animal welfare and the possible impact of development in growing communities. Clea Simon naturally touches upon these issues as part of her story, adding depth and insight amidst the humor and more cozy mystery feel the novel offers.

With plenty of playful moments with the loveable Musetta and a chance to get to now Theda’s boyfriend, Bill, a little more, Cries and Whiskers does not disappoint. It is a great addition to the series. Clea Simon sets up the story quite well, and once it gets under way, there’s no turning back.

Favorite Parts: I admit it. I love jazz music, and I doubt I would have found myself in need of distraction at a jazz concert the way Theda did. I was quite amused with how she kept herself awake and will have to keep that in mind the next time I have to sit through a rather dull lecture or some other event where I find my eyes drooping.

I also enjoyed the moments that Theda gave Musetta extra attention, playing with her. Some of their games reminded me of those I play with my own cat.

Miscellaneous: There is always a bit of sadness that comes with finishing a series, or at least catching up. Now the wait for the release of the next book begins . . .

Ohp! My own feline friend has decided to visit, jumping up on my desk and in front of my monitor (you should try trying to see around him!). Time I get this posted and give him some much deserved attention.
Posted by Literary Feline at 12/09/2007 12:43:00 AM