Spring is definitely here. I can feel it in the air. Yesterday was a beautiful day. The high was 89F. Luckily this Easter Bunny knows filling eggs with chocolate that will be is a no no this time of year. We do not have any big plans for Easter, although this Easter Bunny has everything ready for baskets and the egg hunt in the morning. After that, it will likely be a typical day in our house. If you celebrate, I hope you have a nice Easter!

March did not turn out quite out as originally planned, although we had enough advance notice that it did not feel like it all that much. My two week break from blogging was semi-productive. Mouse was sick for the first week, and I was sick for the second week. And now Anjin finds himself under the weather. Add to that our spring allergies . . .On the fun side, we celebrated Mouse's birthday early on in the month, had a visit from my brother and his wife mid-month, and my mom just got into town this past week. I got to see some of the photos from my mom's trip to Greece, and hear about what a great time she had. While I couldn't participate in the March For Our Lives because of a prior commitment, my mom and a good family friend were able to. I was with them in spirit, you can be sure. I loved seeing the crowds of people join together for such a good cause. My mom's dog's health took a turn for the worse recently, and while the medication seems to be working, we are still keeping a watchful eye on her for any more seizures. She's an older dog and the timing couldn't be worse with my mom due to go in for surgery again the second week in April.

Rehearsals for the Wizard of Oz got off to a good start, and Mouse is enjoying her new classes, especially musical theater. Fundraising for the show is in high gear too. I really hate fundraising, but it's a necessary evil. Shows and activities are not free, after all. Report cards came out. Mouse got to go horseback riding with her Girl Scouts troop. The day horse camp was one of the activities the girls wanted to spend their cookie money--that and Disneyland, which we will be doing in April. Mouse's dance studio generously donated a teacher and a classroom and gave the Girl Scout troop a free dance lesson in March as well for one of our meetings. Mouse, of course, was excited to show off her dance studio to her friends. Mouse's school Open House was this past week--and she got an opportunity to take me and her grandmother on a tour of her classroom. I had to take a little quiz to see if I knew my daughter's favorites. I missed a couple, including her favorite book. I guessed Maggie and the Monster. She put War and Peace (she likes it when I read excerpts to her at bedtime).

The new supervisor started in mid-March. I and another supervisor have been tasked with training him. Hopefully having him on board will bring us some relief after having been so short staffed the last couple months.

I hope to get to comments and visiting blogs in the next week or so. It is hard to do when my mom is in town and with my in-laws coming next weekend, my computer time is extremely limited. Thank goodness for the schedule ahead feature for blog posts!

My reading in March was about average for me. The reading fever of the first two months of the year seems to have subsided. I decided to knock off some of the paranormal romance novels that have been lingering on my Kindle because I knew they would be quick and easy reads. I finished the last of my Going Postal Mail books for this round, and enjoyed it quite a bit. I also made sure to read March's TBR List winner, which many of you voted for.

Here is what I read in March:

The Book of Unknown Americans is probably my favorite book read in March. The Storm King comes in at a close second. I loved that the weather here was somewhat stormy as I read it--it added to the atmosphere for The Storm King quite nicely! My least favorite is probably Hooked on a Phoenix, but it was entertaining overall. My reviews of all three are still to come.

Book Reviews Posted in March (but not necessarily read in March):

Non-Book Review Posts in March:
New to Mouse's Shelves in March (you can thank her birthday and the school book fair): 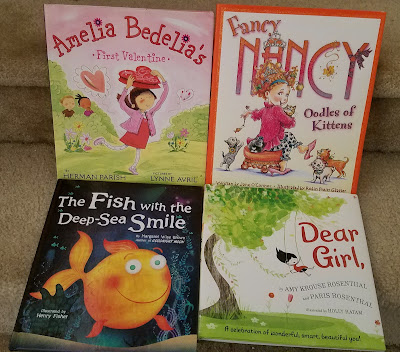 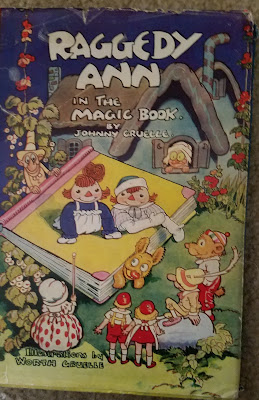 Raggedy Ann in the Magic Book by Johnny Gruelle, illustrated by Worth Gruelle 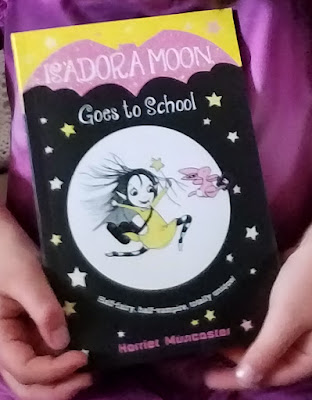 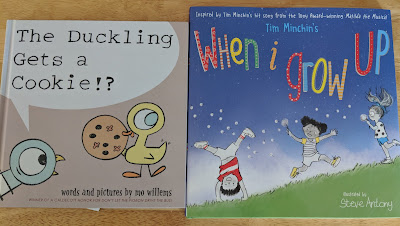 The Duckling Gets a Cookie!? by Mo Willems
When I Grow Up by Tim Minchin and Steve Antony 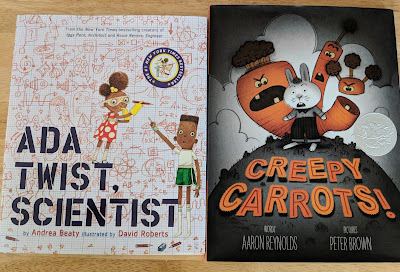 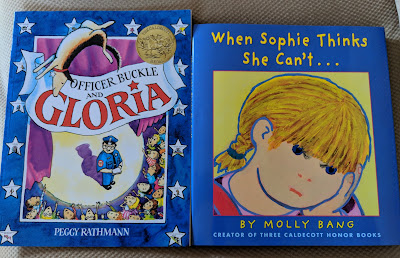 Officer Buckle and Gloria by Peggy Rathmann
When Sophie Thinks She Can't... by Molly Bang 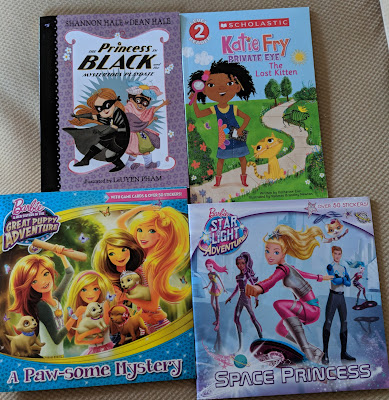 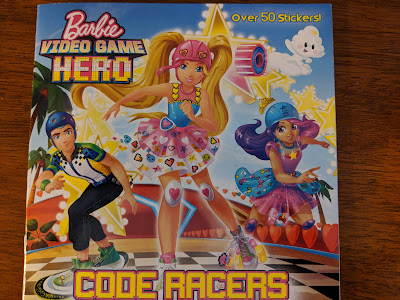 And then because I couldn't help myself (for me): 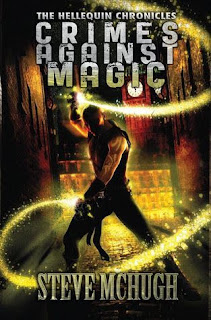 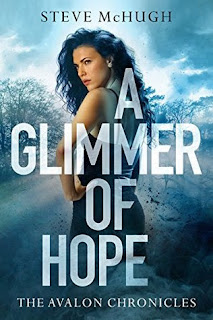 A Glimmer of Hope (The Avalon Chronicles #1) by Steve McHugh 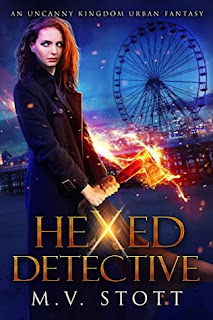 
What I Watched: I may not have been able to read while sick, but I managed to watch the second season of Dark Matter. I also am in the middle of the second season of Jessica Jones. My daughter and I have started re-watching Mia and Me, a part live action, part animated show about a teen girl facing various obstacles in her real life and then stepping into the shoes of an elf and solving problems there as well. We also have been watching the television show Spirit Riding Free, which we both love. We haven't actually seen the movie the show is a spin-off of yet, but one of these days I am sure we will.

Those of you who watch The Walking Dead, how are you feeling about this season so far? The Saviors latest "weapon" is sure a doozy!

What I Am Grateful For:  My mom's safe arrival for her spring visit. I am also grateful for the generosity of the dance studio directors for opening their doors for our Girl Scout troop--they are a great group all around. The fun time we had at the horse ranch. The girls had a blast. And I love seeing Mouse so happy. And I appreciate my boss's willingness to cover for me so I can attend Mouse's award ceremony at school this past week.

What I Am Looking Forward To: Disneyland with Mouse and her Girl Scout troop in April. Life getting back to some semblance of order in another week or two.

#COYER Winter Switch ~ The challenge ended on the 9th of March, and I did better than I anticipated. I completely forgot to link any of my book reviews to the website though--which seems to be a common problem for me. Oh well. I am satisfied with how it turned out just the same.

What's In A Name Reading Challenge ~ I still stand at only having read one book for this challenge. I probably should work on this one more.

The Grand World of Books Reviews Bingo ~ I am sure I can cross some books off of this list, but I just haven't had time to fit what I have read into the categories. Hopefully I can do that by next month's wrap up.

2018 Witches and Witchcraft Reading Challenge ~ I have read the first three Innkeeper Chronicle novels by Ilona Andrew so far, which fit into this challenge. I plan to post my reviews soon.

2018 Discussion Post Challenge ~ I have only managed to post one discussion post so far this year. I have ideas. I just need time to write the posts!

2018 Blog All About It Challenge ~ I have been able to stay on top of this one. This month I wrote about Favorite Scents.

Les Misérables Read-Along ~ I understand now why many people seem to get stuck on Waterloo. Yeah. I would too if I wasn't determined to read this book. I was so relieved when I saw Thenardier's name pop up at the end of the Waterloo section. A connection to the rest of the book! I am now about two chapters ahead in my reading.

War and Peace Read-Along ~ Although I am a bit behind, I find myself enjoying my time with War and Peace these days.  I still do not have all of the characters straight, but several stand out to me now and I find myself interested in their stories. Surprisingly, I am most enjoying the scenes on the battle field and with the soldiers. Although I was really curious to see whether a particular proposal would be accepted or not--and I thought it was perfect the way that one played out. I'm anxious to get back to those characters and find out what the fallout is going to be. My daughter has become a fan of War and Peace. She says because there is a prince and princesses. A good friend of mine suggests it might have more to do with the fact that my daughter enjoys my reading to her--and sharing my own books with her. While I am not reading the entire book to her, I do read passages to her at bedtime.


How did your March shape up reading and life wise? What was your favorite book you read in March? I hope you all have a wonderful April! Happy Reading! 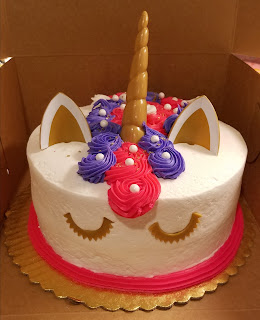 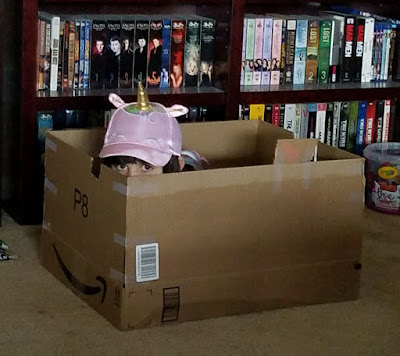 Unicorn in a box 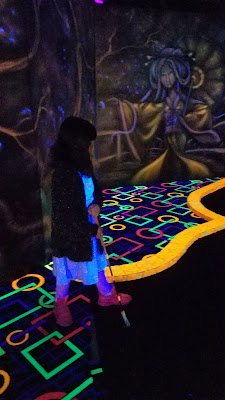 Glow in the dark miniature golf 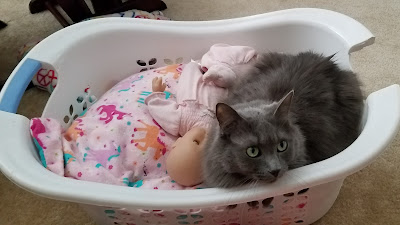 Cuddling with the baby 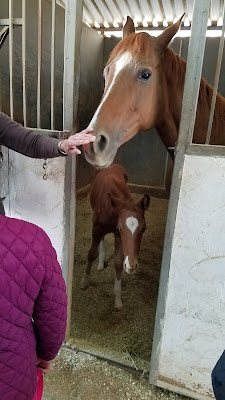 Mama and her 6 week old 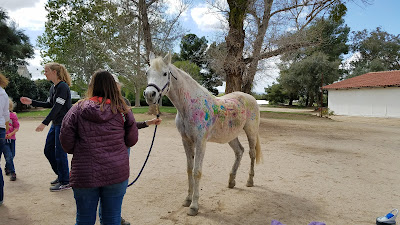 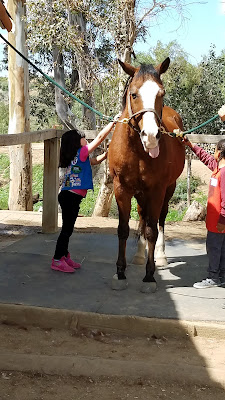 Grooming Rambo as he makes a funny face for the camera 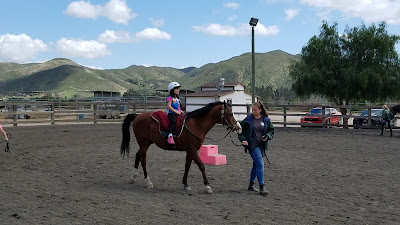