In reading . . .
Then
I started reading Smoke Gets in Your Eyes & Other Lessons from the Crematory by Caitlyn Doughty in hopes of adding another nonfiction book to my list of challenge books read, but the timing wasn't right and so I have set it aside for now. It is definitely a book I want to read still and hope to pick it up again later. Sometimes mood is everything.
In its place I picked up The Charm Offensive by Alison Cochrun, a queer rom-com set in the middle of a reality dating show. It was funny and adorable and just what I needed reading-wise. 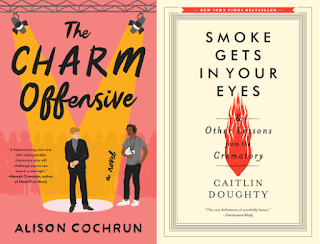 Now
Mouse and I are enjoying seeing favorite characters come to life as we read in Tilly and the Bookwanderers (Pages & Co #1) by Anna James together. It is a middle grade novel about an eleven-year-old girl who is able to travel inside the stories she reads. A bit of magic, adventure and mystery--three of Mouse's and my favorite qualities in a book.
I am also reading Be My Ghost, the first book in Carol J. Perry's new Haunted Haven mystery series featuring a woman who inherits an inn just when she most needs to make a fresh start. The timing couldn't have been more perfect. Except for maybe finding a dead body. There are ghosts. And a charming failed guide dog named Finn. I am enjoying it so far. 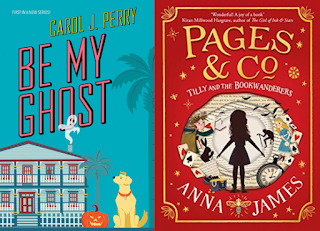 Next
Oh goodness! I am not sure what I will be reading next, honestly. As stressed, anxious, and busy as I have been, something fun and escapist will likely be the way to go. Perhaps the third book in Juliette Cross's paranormal romance Stay a Spell series, Witches Get Stitches. I really liked the first two books in the series. There's also The Shaadi Set-Up by Lillie Vale, a rom-com involving being matched with an ex by an online dating service, that sounds fun. The Last Chance Library by Freya Sampson, about a lonely woman who joins forces with the community to save the library in their small English village, also sounds very appealing.   Then there is The Inheritance of Orquídea Divina by Zoraida Córdova which has caught my attention, if I am craving something a little darker.

What I Have Been Watching
My husband and I are continuing to make our way through Broadchurch. It is such a good but sad show. We recently began the third and final season.  We took a break from the heaviness of Broadchurch to watch the first season of Ted Lasso. To be honest, I was not very interested in watching a sports show, but my husband wanted me to give it a chance. And now I am completely hooked. It is such a good show--funny, uplifting and entertaining.

Monthly Wrap Up
New to the Shelves in July:
E-Book Purchases: 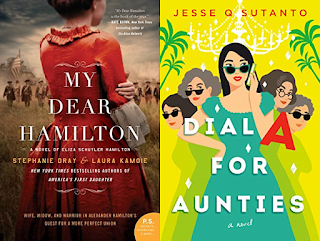 My Dear Hamilton: A Novel of Eliza Schuyler Hamilton by Stephanie Dray & Laura Kamoie
Dial A for Aunties by Jesse Q. Sutanto
Book from my local independent bookstore: 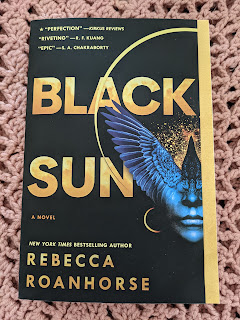 Black Sun (Between Earth and Sky #1) by Rebecca Roanhorse
Have you read any of these books? What books did you add to your TBR this past month?
Here is what I finished reading in July:
My reading in July was a mixed bag falling mostly on the enjoyable side. I did not dislike anything I read, at least. Jennifer Ashley continues to be a favorite with her Kat Holloway series and I adored Vanessa Yu's Magical Paris Tea Shop. Kim Harrison's series is a lot of fun and is becoming my go to series when I need an extra-comfort read. I imagine it will not be long before I pick up book 5 in the series.
This Past May In Reading Mews:
How did your July shape up? Do you have a favorite among the books you read? What are you looking forward to in August?

Off the Blog
July got away from me. And August is going to slip right on by as well. I have barely had a chance to turn on my personal computer. Lack of time. Lack of motivation. A good mix of both, I'm afraid. We have been keeping indoors as much as possible to avoid the heat. My medical procedure went well (no cancer found--thankfully). I also finally got around to the optometry appointment I had been putting off. Mouse had her annual check-up as well.
In July, Mouse attended a two week dance intensive, which she really enjoyed. Probably more so because she got to spend time with some of her friends. Mouse's rehearsals for the Annie musical and showcase performance have stepped into high gear as we count down to performance weekend the weekend after next. So much work, energy and time go into pulling off these of shows. We have two more dress rehearsals to go, including one this weekend. I am exhausted already thinking about it! The pandemic is never far from my mind, especially with the rapid rate the new variant is spreading. I go between thinking this is a terrible idea, that we should pull out, to not wanting to take this away from my daughter (or the other kids) given how much it means to her and how much work she's put into it--and how close it is to show time. The studio and everyone involved have been taking precautions and have safety measures in place, at least.
Mouse starts school next week. Masks are mandatory in schools here in California thankfully (although it hasn't stopped some parents from protesting and petitioning against them). The school will also be taking the students' temperatures as they come onto the campus. Mouse has the usual back to school nerves (new grade, new teacher) but also added in is whether the school friends she hasn't seen in over a year will remember her and what the environment will be like--how much the same and how different things will be for her. For the last couple months she has been attending the summer camp portion of the after school care program attached to the school a couple days a week to help ease her back in. So, she will have some familiarity in terms of expectations at school and in the after school program going in.
The new hybrid rotation at work started last month and went fairly well. I had stimulus overload on my first day back in the office with my team. I was so used to having the office to myself--or close to it--for over a year. And while there still were not a lot of people in the office all at once, each team often sits in the same general office area and so it felt a bit crowded going from one to seven people in my section. All of us continued to wear masks--even those of us who had the option not to. We had a nice send off for my team member who is moving out of state. I was really sad to see her go but glad I got the opportunity to say goodbye in person. I have to admit I was happy when my week in the office was up and I could work from home again. Our turn in the office will be coming around again soon enough.
With work, school starting, the show and an upcoming visit from my mom, I think it is time I make this break official. I will be back in September and hope you all have a wonderful August in the meantime. Please stay safe and take care of yourselves. 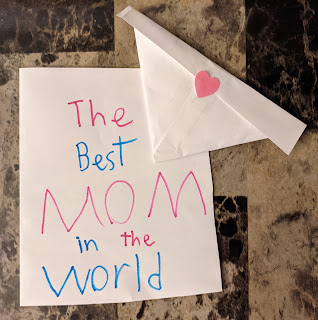 On a particularly difficult work day (unbeknownst to my daughter),
she handed me a handmade card and a little gift she made for me.
The note inside is even sweeter. 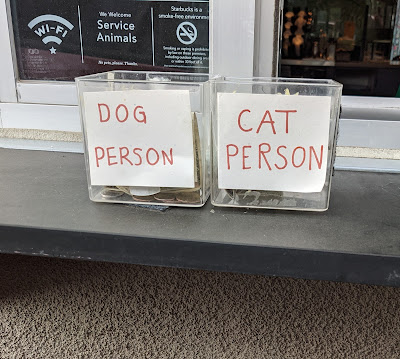 At the local Starbucks drive thru
Tell me what you have been up to!
What are you reading, listening to and watching?
How was your week?
© 2021, Musings of a Bookish Kitty. All Rights Reserved. If you're reading this on a site other than Musings of a Bookish Kitty or Wendy's feed, be aware that this post has been stolen and is used without permission.
Posted by Literary Feline at 8/07/2021 12:00:00 AM 67 comments: