Where Is Your Bookmark? (The Stranger in the Mirror & Paris in July TBR Connect 5)

I'd like to think I'm a good person, but I have no way of knowing for sure. [opening line of The Stranger in the Mirror]

Frantically I begin to search the room, opening every drawer, running my hands along their insides. I even check the bathroom, flinging open the vanity doors and drawers. Nothing. I sit on the bed and try to think. Did I put it somewhere else? No. I'm sure the last place I put it was in that drawer. [excerpt from 56% of The Stranger in the Mirror] 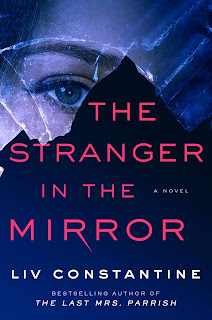 After finishing my last book, I was in the mood for something dark and thrilling and settled on Liv Constantine's The Stranger in the Mirror. I am not too far in yet, but I was hooked from the first first line!

A diabolically twisty, psychologically unsettling novel about a woman with no recollection of her past from the authors of the Reese Witherspoon Book Club pick The Last Mrs. Parrish and The Wife Stalker.

Addison’s about to get married, but she’s not looking forward to the big day. It’s not her fiancé; he’s a wonderful man. It’s because Addison doesn't know who she really is. A few years ago, a kind driver found her bleeding next to a New Jersey highway and rescued her. While her physical wounds healed, Addison’s memory never returned. She doesn’t know her real name. Or how she ended up injured on the side of a road. Or why she can’t shake the notion that she may have done something very, very bad . . .

In a posh home in the Boston suburbs, Julian tries to figure out what happened to his loving, caring wife, Cassandra, who disappeared without a trace two years ago. She would never have left him and their seven-year-old daughter Valentina of her own free will—or would she?

As these two lives intersect, The Stranger in the Mirror hooks readers with riveting drama, told with Liv Constantine’s hallmark blend of glamour, tense psychological thrills, and jaw-dropping twists.

Have you read The Stranger in the Mirror? If so, what did you think? What book are you reading right now?

Connect Five Friday is a weekly meme where readers share a list of five books,
read or unread, or bookish things, that share a common theme.
Hosted by the  Kathryn of of Book Date.
Although I am not participating in this month's Paris in July event hosted by Thyme for Tea, I do seem to have Paris on the brain. As I was selecting three books for July's TBR List Poll (there's still time to vote if you haven't already! Help me break the tie!), I came across quite a few titles with the word "Paris" in the title. Here are a few more that did not make my poll this month but are still books on my TBR shelves that I am looking forward to reading someday.

The Paris Library by Janet Skeslien Charles ~ Books set in and around the World Wars are among my favorites and I especially like dual timeline novels, this one set in Paris 1939 and Montana 1983. The Paris Library features a teenager longing for something different in small town Montana when she discovers more about her elderly neighbor's past. This is the story of a young woman who couldn't have been happier, engaged and with her dream job as a librarian at the American Library in Paris at one time. The Nazis appearance in the city put all of that at risk. Librarians joining in the Resistance and a terrible betrayal . . . I want to know more!

The Bones of Paris (Harris Stuyvesant #2) by Laurie R. King ~ I have long wanted to read Laurie R. King's Mary Russell/Sherlock Holmes series, but still haven't managed to read even one. This series caught my eye as well. I still need to read the first book, Touchstone. This mystery takes us to Jazz Age Paris, 1929. P.I. Harris Stuyvesant is searching for an American model and actress whose family is concerned after they have lost contact with her. As his investigation takes him into the expatriate community, among the writers and artists, cafes and cabarets, he finds himself on a much darker path. No one may like what they find. Once I start reading this one, I have a feeling it will be hard to put down.

The Paris Wedding by Charlotte Nash ~ Who could pass up an all expense paid trip to Paris? Even if it is for the wedding of a former high school sweetheart she never quite got over. No one knows what the week will bring--secrets revealed, friendships turned inside out, and the biggest question of all: can she move on or will an old flame be reignited? I cannot help but think of the movie My Best Friend's Wedding. Will it follow a similar path or go in a completely different one?

All the Flowers in Paris by Sarah Jio ~ I do love these dual timeline historical novels. And Sarah Jio is an author I have read before and loved. So adding this one to my TBR shelf was a no brainer. It is another World War II novel and two women connected through time by a journal hidden in a closet. Waking up in a Paris hospital Caroline cannot remember her past. She is drawn into the story of Celine and her family as she reads the journal entries about Celine's life during World War II. A young widow, her father, and daughter attempt to escape from the Nazi officer who has been blackmailing them, Celine forced to be his mistress in exchange for his keeping her family's Jewish ancestry a secret. Caroline and Celine's stories are full of dark secrets and hidden strengths. This sounds heart-wrenching!

The Little Paris Bookshop by Nina George, translated by Simon Pare ~ This is one of those books I was so excited about when it came out and yet it still sits unread on my shelves. Not for lack of interest, I can assure you. A floating bookstore in which Monsieur Perdu sells books from his barge on the Seine. He is intuitive and knows just which book to prescribe to his readers. He calls himself a literary apothecary. He has long been haunted by his own heartbreak, however. He never opened the letter she gave him before she left. Until now. Will he be able to heal himself? How have I not read this yet?!

Have you read any of these books set in Paris? What books with Paris in the title would you recommend?

Where do you post your reviews? (submitted by Elizabeth @ Silver's Reviews)

I start with sharing my thoughts about the books I read on my blog and then will follow up with posting them on Goodreads. If I received the book from NetGalley or Edelwiess, I usually post them there too. Occasionally, when I remember, I may post my thoughts on LibraryThing too.

What about you? If you write reviews, where do you post them?
I hope you all have a wonderful weekend! Be sure and tell me what you are reading and are up to!