Bookish Thoughts: The Couple Next Door by Shari Lapena

Anne can feel the acid churning in her stomach and creeping up her throat; her head is swimming. ~ Opening from A Couple Next Door 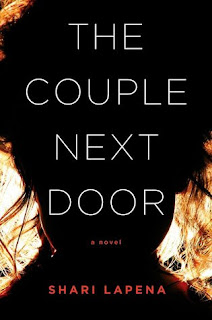 When I pick up a book like this, my mind automatically starts thinking of all the possibilities. While being right about the direction a book may go can be rewarding in and of itself (Ha! I’m right again!), so can being surprised. What I especially liked about The Couple Next Door is how it nailed both of those feelings with each new twist.

I have mixed feelings about books involving missing children, but there is something about them that I can’t resist in a thriller just the same. I liked that this novel felt like a thriller right from the start and did not get bogged down by the emotions of the grief-stricken parents as sometimes these types of novels can. Shari Lapena does a good job of balancing the grief and fear the parents felt over their missing infant with the mystery of what happened. The parents’ feelings are palpable. What mother wouldn’t be terrified to come home and find her child gone? Feelings of fear and guilt would be overwhelming. They certainly are for both Marco and Anne, whose daughter was taken from her crib in the middle of the night.

When the babysitter had called off, Marco convinced Anne to go through with their plans to attend the next-door neighbor’s party. The two homes are attached, they have their baby monitor with them, and they are taking turns checking on the baby throughout the night. Anne still feels guilty about leaving her daughter, Cora, alone like that. Weighed down by post-partum depression and needing a bit of time away, however, she goes along with her husband’s plan.

What follows is a fast-paced and tense-filled thriller that had me on the edge of my seat. I listened to the audio version, which was very well done. As can be expected for a book like this, everyone has their secrets, including the next door neighbors whose party Anne and Marco attended. It is hard to find a character one can feel completely sympathetic too (with the exception of dear little Cora). I did feel for Anne though. Having suffered from postpartum depression myself, I know how difficult it can be.

I liked that Shari Lapena offers a glimpse into each of her character’s minds, giving us the opportunity to better understand their motives and situations. Each one was a piece of a puzzle, and seeing where and how it fit in was what really made this book the most interesting for me. The Couple Next Door was a wild ride that I was caught up in the moment as I listened to it, and could not wait to see how everything played out.

To learn more about Kirsten Potter, please visit her on Goodreads.