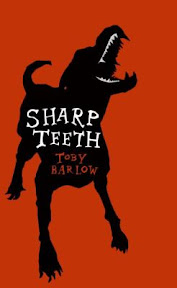 
First Sentence:
Let’s sing about the man there
at the breakfast table
brown skin, thin features, white T,
his olive hand making endless circles
in the classifieds
“wanted” “wanted” “wanted”
small jobs little money
but you have to start somewhere.

Reason for Reading: After reading a brief synopsis of the book, I was curious about the book and requested to review it through Harper Collins First Look Program.

From the Publisher: An ancient race of lycanthropes has survived to the present day, and its numbers are growing as the initiated convince L.A.'s down-and-out to join their pack. Paying no heed to moons, full or otherwise, they change from human to canine at will, and vice versa — and they're bent on dominance at any cost.

Comments: I actually had no idea Sharp Teeth was a novel-in-verse until it arrived in the mail and I was thumbing through it. Rather than be put off by the unexpected format, I decided to embrace it. While not beautiful in prose, Toby Barlow does have a gift for language. The author takes a more straightforward, at times harsh, approach, which matches the dark and gritty tone of the book. It is quite effective and perfect for the tale the author has to tell, and it flows naturally.

The story itself is quite entertaining and suspenseful. Anthony is a down and out man who takes a job with animal control when no other options work out. He quickly finds he prefers the dogs to his coworkers. The grisly murder of one of the other dogcatchers draws the attention of the police, in particular Detective Peabody who soon finds himself on an unexpected trail that has attracted the attention of a mysterious caller. Meanwhile, the remaining members of Lark’s pack are trying to make their way as best they know how after being attacked by a new rival gang. It is down to a game of survival. The rising gang of lycanthropes holds quite a few of the cards; they have no bones about leaving carnage in their wake. A young woman is desperate to get revenge for the devastation wreaked on her pack many years before, and a powerful man is determined that the revenge instead will be his. Each of the story threads running through the novel are interconnected, weaved together seamlessly. They all come together for a hair-raising finale that had me gripping the book tight in my hand.

The characters themselves are what make the story; they are complex and broken, and yet still very powerful by their very nature, even dangerous. Each in their own way they are trying to find a way to survive and come out on top. I was most drawn to the character of Annie, a young surfer girl who had suffered much, and yet she still kept coming back, trying to regain what she once had lost and build anew.

Sharp Teeth is a remarkable novel. It is daring in style and full of soul. And to think I might not have even requested the book had I known it was a novel-in-verse. I look forward to seeing what else Toby Barlow has to offer in the future.

Favorite Part: My favorite scene in the novel was when two of the lycanthropes in their dog form stop at a puddle for a drink; one had been chasing the other, and both were exhausted from the chase. This is one of those scenes you best understand if you have read the book, I am afraid.
Posted by Literary Feline at 12/29/2007 11:00:00 AM