The Haunted Bookshop by Christopher Morley 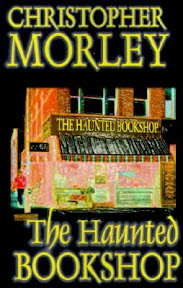 
First Sentence: If you are ever in Brooklyn, that borough of superb sunsets and magnificent vistas of husband-propelled baby-carriages, it is to be hoped you may chance upon a quiet by-street where there is a very remarkable bookshop.

Reason for Reading: This book came recommended by a friend several years ago. I have an ancient copy of the book, cover tattered and falling apart, which I found on E-Bay after having no luck finding a new copy online or in the stores.

Comments: If ever there was a book meant for booklovers, especially one who enjoys a mystery, a touch of romance and eccentric characters, this is it. Christopher Morley’s The Haunted Bookshop was a pleasure to read.

The Haunted Bookshop is actually the sequel to another of Christopher Morley’s novels, one called Parnassus on Wheels. I have yet to lay my hands on a copy of that particular book, sad to say. Having not read the previous book, I had no trouble following along or getting to know the characters. This is very much a stand-alone novel, however.

Roger Mifflin is an eccentric bookseller who owns and runs Parnassus At Home, otherwise known as the Haunted Bookshop. One day while Roger is running the shop alone, his wife off on an adventure in Boston, an advertising salesman wanders into the store and makes a pitch hoping to land a new account. Aubrey Gilbert is young and eager, but Roger is adamant that he does just fine with the word of mouth advertising his loyal customers provide him. Just the same, the two strike up a friendship.

The bookseller and his wife Helen had previously agreed to take in a nineteen-year-old girl at the request of her wealthy father. Mr. Chapman fears his daughter has taken in too many frivolous ideas, and he believes she is in need of a serious reality check. He thinks that working and living at the second hand bookshop is just what the young woman needs. Titania is a delightful and lovely young woman who turns many heads and yet is friendly and eager to begin this new enterprise.

Just before Titania’s arrival, a man comes to the shop looking for a particular book that Roger is sure he once had on his shelf. The book, however, is missing. When the book reappears later on, Roger couldn’t be more puzzled. Thus begins a mystery full of danger and intrigue. Aubrey is determined to uncover whatever nefarious plot there may be, fearing that the beautiful Titania may be at the greatest risk.

I was most taken in by Roger Mifflin and his obvious love for books as well as his job. While he is a bit of a book snob, it was hard to hold that against a man who understands the hold a book can have on a reader. Although not a prominent character, Helen is definitely a presence in the book. She is down to earth and sensible while Titania is sprightly in her youth. It is really Aubrey who carries the forward motion of the story, however, ever tenacious in his pursuits.

Christopher Morley has written a charming novel that is full of humor, while at the same time it is quite exciting. Set at the end of World War I, talk of peace and the politics of the war place this book more firmly in history as do the events that unfold with each turned page. I definitely plan to continue in my search for a copy of the prequel to this novel and perhaps venture onto some of the authors other writings. It was a pleasure to spend time with him and his characters.

Favorite Parts: I loved how Roger put together Bock’s kennel—a booklover’s haven for a dog.

The term librocubicularist, which refers to a person who is fond of reading in bed (a word completely made up by the author).

Cringe worthy quote: “He knew his disadvantages in literary conversation, for he had gone to an excellent college where glee clubs and theatricals had left him little time for reading. But still he was a lover of good books, though he knew them chiefly by hearsay.” [pg 16]

In response to the assumption that working in a bookstore is tranquil: “’Living in a bookshop is like living in a warehouse of explosives. Those shelves are ranked with the most furious combustibles in the world—the brains of men.’” [pg 19]

“’I tell you, books are the depositories of the human spirit, which is the only thing in the world that endures.’” [pg 50]

“’Did you ever notice how books track you down and hunt you out? They follow you like the hound in Francis Thompson’s poem. They know their quarry!’” [pg 132]
and
“’ It’s one of the uncanniest things I know to watch a real book on its career. It follows you and follows you and drives you into a corner and makes you read it.’” [pg 132]

Miscellaneous: We went to see The Kite Runner today, which was playing a little closer to home than expected. There are several other movies I am anxious still to see before the year is out. Atonement, Sweeney Todd, Juno, and Charlie Wilson's War are all on our list. I do not know if we will get to them all, but we will put in a good effort.
Posted by Literary Feline at 12/23/2007 12:04:00 AM