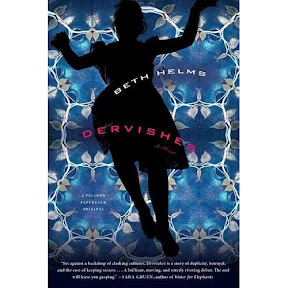 First Sentence: The telephone chimed as it always did, in the deep, dead middle of the night.

Reason for Reading: One of my places to look for book recommendations is Bookbrowse. Several months ago Bookbrowse began a pre-release program called First Impressions for reading and reviewing soon-to-be-released books. Dervishes caught my eye, and I put my name in for it, not really expecting anything to come of it. Much to my pleasure, I soon received the book in the mail.

From the Publisher: Grace and Canada are the wife and twelve-year-old daughter of an American diplomat stationed in Ankara. While he disappears for long stretches, mother and daughter are forced into a fiercely gossipy, isolated community of Western ladies and wealthy Turks. Fed up with each other during the hot summer months, when the electricity shuts down throughout the city from dusk to dawn, each ventures out beyond the embassy swimming pools and cocktail parties into Ankara. But neither is quite equipped to navigate on her own in Turkey, and they are soon lost in a society they can't possibly comprehend. Their transgressions threaten to strand them between the safe island of expatriates and a city still hostile to the presence of foreigners.

Comments: Dervishes is a beautifully written novel set in the mid-1970's, the characters intricately drawn, and the plot raw and yet unassuming. Mother and daughter are much alike, both distant, and difficult to grow close to as a result. Throughout the novel, the characters remain at arm's length to the reader, which was a distraction not easily overcome. Neither mother nor daughter is particularly likable. Just the same, as the story goes on, it is impossible not to feel for this family whose members are lost and wounded, living together and yet apart.

Grace had hoped for more when she married her husband, a man whose work is drenched in secrecy. By the time the family is relocated to Turkey, Grace has grown tired of the mystery that once intrigued her and weary of the distance that now seems to envelope them. Canada, ever her father’s little girl, is entering her teens, with one foot still in childhood and the other trying to find its footing in the adult world. Having come by her self-efficiency at an early age because of her family’s life of constant change, Canada settles into life in Turkey with ease. Or so it seems in the beginning.

Told from the point of view of both mother and daughter, Dervishes takes the reader on a sensuous and difficult journey that is filled with temptation, petty jealousies and misunderstandings that are not easily resolved. Author Beth Helms makes sure of that every step of the way. The two struggle in their relationships with others, as well as with themselves.
Posted by Literary Feline at 12/11/2007 05:00:00 AM