A squat grey building of only thirty-four stories. ~Opening of Brave New World 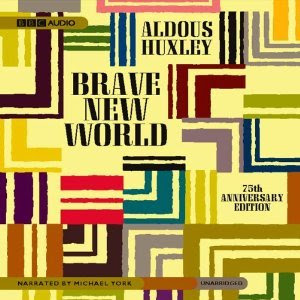 Far in the future, the World Controllers have created the ideal society. Through clever use of genetic engineering, brainwashing and recreational sex and drugs, all its members are happy consumers. Bernard Marx seems alone harbouring an ill-defined longing to break free. A visit to one of the few remaining Savage Reservations, where the old, imperfect life still continues, may be the cure for his distress...

Huxley's ingenious fantasy of the future sheds a blazing light on the present and is considered to be his most enduring masterpiece.


This was assigned reading in one of my university courses, and it was the only book I was required in my entire school career (middle school, high school, and college included) that I was unable to finish. Somehow, I got a passing grade on the test. Years later, I would try again, thinking perhaps the timing just wasn't right. I did not get too far then either. The descriptions of the "perfect" Utopian society in the novel boring me to tears. I decided to give the audiobook a try this time around, hoping I would have better luck, and also determined to finish it this time.

Michael York's narration did appeal to me more than my own inner voice. Perhaps it was the English accent. Still, it was not enough to pull me into the book completely the way I hoped. I must admit I understood exactly what Bernard Marx, the initial protagonist, felt for much of the first half of the novel. In a society created of perfect conformity, including the people thanks to Eugenics and brainwashing, there was bound to be someone who wouldn't quite fit in. And that is Bernard Marx. I was just as bored of the society he lived in as he was.

Halfway through the book, I thought maybe things would pick up. Bernard and Lenina traveled to the Savage Reservations, encountering something--or, rather, someone--unexpected. The perfect society the World Controllers have created is suddenly tested when an outsider attempts to fit in.

Some of my thoughts as I read the novel:


I wish I had liked this book more. I appreciated the satire woven throughout the novel; from the mass production of people, programming them in varying intellectual abilities depending on the role they will play in society, the soma pills to escape reality and repress emotions, the avoidance of family connections to the the sexual play encouraged among children and religion in the worshiping of Ford. I would even go so far as to say Huxley satires happiness--or rather the way people seek it out and expect it.

It's interesting how relevant this book is today as it was then. While some of the language used might be a bit dated, not much else in this novel is. Think about how technologically driven we are and how much on the rise instant gratification has become, for example. Looking at today's society, it is easy to see how, in some respects, we are constantly expecting to be entertained, sometimes at the cost of education, logic and common sense.

There was a definite message in the novel about the stunting of creativity living in a society like the one the World Controllers have put together. Where people do not think much for themselves and are supposed to avoid strong feelings--or feeling much at all other than happiness. How much of it is a false happiness though? Marx and Helmholtz, in particular suggest that it is.

And what of religion? This book has come under attack for supporting atheism, which I have to say I didn't notice as I listened to the novel. Huxley does draw religion into the novel, suggested that people need to be mindful and think for themselves. It is too easy to fall into step and stop thinking for oneself where religion is concerned. This comes out even more so in the way the people in Huxley's Utopia live their lives.

While I did not enjoy reading Brave New World, finding it a chore to get through, I do see the value in it--and why it is a Classic today. Looking over my review, I see I got more out of it than I realized!

Have you read Brave New World? What did you think?