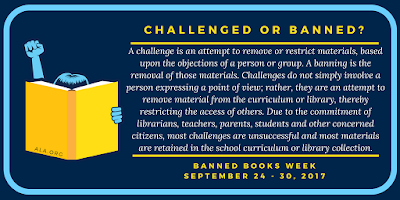 Banned Book Week came into being in 1982 because of a influx in banned and challenged books in our schools, public libraries and bookstores. The list of books challenged each year is likely under-reported, but even so it is extensive. With the number of challenges made to books continuing to this day, it is still a problem worth paying attention to. One might argue a challenge is not a ban, but if no one opposes a challenge, the chance of a book being banned goes up. And then where does it stop?

Growing up, whenever I had a question, my father would point me to our home library and tell me to look it up. I grew up in a family that valued books, ideas, and education, and encouraged my reading. I feel very lucky that my parents let me read what I wanted, helping to foster my love for reading. They were always there if I had questions or needed to discuss something. My dad and I had numerous discussions about some pretty deep issues I encountered in books. He and I may not have had the best relationship all around, but that was one of the things I most loved about him.

I had not intended to write this post, but I was inspired by the comments of a fellow blogger who feels that banning books on a school level is not bad, but, in fact, is a good idea. I think her heart is in the right place, but I could not disagree with her more. The argument made to ban books from schools is often, if not always, that it is to protect children from harmful content, whether that be offensive material or beliefs and ideas that go against the parents' or guardians' personal beliefs.

I was really drawn to Charlie of Girl of 1000 Words comments about how fear is at the root of those who wish to ban books. Fear of what they do not know or the unfamiliar. Fear that their own beliefs are possibly being questioned. Fear of change. Fear their children will be tainted or harmed, fear of not being in control. Ideas can be frightening. Especially ideas that aren't our own.

One concern  that often arises is that children may have access to books in schools and the school libraries which their parents won't be aware of or be able to control. I don't know about your school library, but my daughter is only six. And I'm pretty sure all her library time is well supervised. They spend an hour once a week in the school library, and while they are allowed to check out books, much of their time in the library is spent under instruction by the librarian. Even as she gets older, I am not sure just how much time she will have in the library on her own to roam the stacks. Even if she does, if she chooses to hang out in the library and read books like Speak,  The Absolutely True Diary of a Part-Time Indian,  Looking  for Alaska, or Catcher in the Rye, I will be happy. It means she isn't behind a bush smoking weed or sexting a stranger. And let's face it. If you tell a child, however nicely, that they cannot read a particular book, it only raises the appeal of that book more. If a child or youth really wants to read a book, they'll find a way.

What of the argument that some books should be banned but not others? Where do we draw the line? For example, let's say you like Harry Potter and see nothing wrong with it; does that make the parents' who want it out of the schools and libraries opinions are less valid than your concern over Catcher in the Rye or Lord of the Flies, books you might not have liked and you yourself find offensive?  What makes your opinion more valid than someone else's? It doesn't work like that. It shouldn't work like that. Then do we ban every book that is challenged? How many books will be left in the schools and libraries?

In today's day and age, with the internet and social media, television and movies, children and youth are exposed to much more than they ever were when I or my husband were children. As a parent, you can limit your child's access, but unless you forbid the child from going to school, to a friend's house, or really, anywhere public, you will not be able to control everything your child is exposed to. It's scary, I know. I worry about outside influences on my daughter too. We only have so much control.

Keeping our kids in the dark is not the way to help them grow up into productive and insightful adults. Study after study shows that in areas where abstinence only programs are in place and sex education in schools is prohibited, the teen pregnancy rate actually goes up. There is a reason abortion rates go up when alternative sources of birth control are forbidden or not accessible to teens (and adults). By trying to "protect" our children by keeping information away from them, we are in fact causing more harm.  Teens are having sex. As young as 12, and sometimes even younger. Not educating them as to the consequences, thinking they are too young and can't handle it . . . It doesn't work. Books that deal with topics of teen sex, rape, masturbation even, drug use, and all those topics we want to protect our kids from are realities kids face today. Saying they cannot read books that discuss those matters is not going to keep them from trying them. In fact, they probably are more likely to try them. Ideally, there is an involved parent or adult in the kid's life that the youth can turn to to discuss the book. That isn't always the case.

Suicide rates show a decline when books about GLBQT children and youth are available. And yet there are those who want to keep  books featuring characters who are gay or transgender off the shelves--including, and especially in our schools. Do you know how many kids come forward about being abused because they read about it in a novel? Quite a few. Even if it was just one kid though, it would be worth it.

Some people would like to think that teenagers should not be allowed to read disturbing subject matter or that they can't handle it. Some cannot, it's true. What I've learned from my own experience and in my interactions with teens is that the are a lot more aware and capable than we adults give them credit for. I was reading Harlequin romances during my teen years as well as John Saul horror novels. I wasn't scarred or damaged from the experience. Most of the readers have similar stories.

This brings up another issue I have with the banning of books though. I get the whole age appropriate argument. There's a reason Fifty Shades of Gray will likely not be found in any high school and middle schools (it's been challenged in public libraries, but not schools, as a matter of fact). Children mature at different rates and what one child can handle, another can't. And just as adults vary in degree in what they can and cannot handle, so do kids. My daughter's friend is really into zombies and loves The Walking Dead. My daughter has no interest in it because she says it is "scary". This isn't something that came from me. Not that I watch it in front of her. She just knows it would be too scary for her.

When kids are my daughter's age, I have a lot more say in what she is exposed to, at least at home, and I have learned that, even at six, she already is able to say what is too much for her and what isn't. I do believe in letting my daughter make her own choices, but it doesn't mean I am not there to guide and discuss things with her. This goes for books or television shows and movies or what have you. For years she's been asking where babies come from and about death. I am one of those parents who believes in honesty--age appropriate honesty, but honesty nonetheless. And so, each time she asks, I answer her questions openly and honestly.

While I do believe a parent has the right to limit what their own child reads or watches, I do not believe that denying all children, even in a school, access to a book is okay. It sets a bad precedent, especially here in the United States where freedom of speech and access to information in not only valued. Banning books teaches our children that if you are afraid of something, if something offends you, if you disagree with it, you can shut it down and pretend it doesn't exist. It discourages our children from thinking for and expressing themselves. It discourages open discourse about ideas that may be different from our own. It promotes isolation, ignorance, and raises the risk of history repeating itself.

Banning books in schools may not seem like a big deal to some. It only impacts the children, right? However, often movements like this start at the grassroots level and gain in traction if allowed to go undeterred. If it is okay for a school to ban a book, then maybe  the next step is to ban it at the district level. Heck, let's keep going. Let's stir up enough animosity toward a book that respectable Christian churches are telling people not to read the book (think Harry Potter). If enough people get up in arms over a book, the local government might too. It's happened before. And from there . . . I live in a country where there is enough awareness about the dangers of book banning, and there are organizations and people who are willing to fight tooth and nail against it, that the chances of it turning into a national ban is very slim. Unfortunately, people continue to wish to take away our Constitutional rights, even if by targeting our children.

I personally believe that schools are one of the best places to read many of the books that come under fire. The classroom offers students an opportunity to discuss and grapple with controversial content, ask questions and practice critical thinking skills.

Do you read banned books? Do you think banning books in schools, libraries and bookstores is every acceptable? 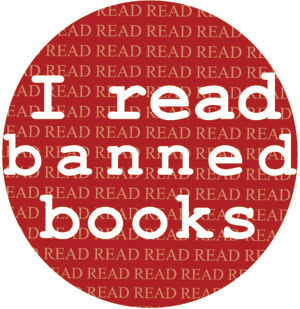