New to My Shelves: A surprise came in the mail this week. It is the first in a new cozy mystery series by Ellie Alexander called Death on Tap, set in the Pacific Northwest and features Sloan Krause, a beer brewer. 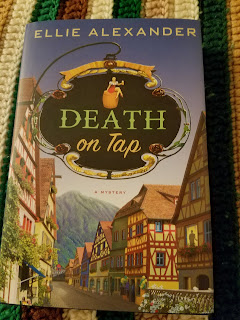 What I Am Reading: I am nearing the end of Teresa Messineo's The Fire By Night, a World War II novel featuring two nurses. Messineo does not sugarcoat the conditions of war in any way. It's a very real and raw look at what the war was like. I am in the middle of Miss Jane by Brad Watson, another historical novel, this one about a woman born with a genital deformity in early twentieth century Mississippi. I have shared excerpts from both novels before, but thought I would share new ones with you today instead of pulling a random book off my shelf.


Better force herself to get up. Or she would die, right there, in her bunk. She thought about it for a minute--or maybe for an hour--and in the end she decided she would get up. In a minute. In just a minute . . . [page 130 of The Fire By Night by Teresa Messineo]


"Sometimes that dog acts like he knows as much about what's going on as we do."

"Dog's suppose to have it easier than that," he said. [page 132 of Miss Jane by Brad Watson] 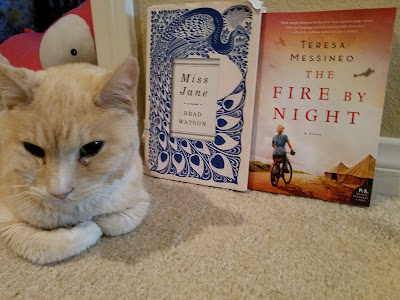 What I Am Watching: The Voice started up again this week, and I caught the first episode of The Brave about an elite special ops unit. I hadn't even heard of it before--it was just on, and so I watched it. I also caught the season premiere of Blacklist, a show I go back and forth on whether I want to continue watching or not. I haven't gotten too excited about this fall's television selections. Usually I am all over them--at least to see what they are all about. I am looking forward to seeing The Good Place again.  Have any of the new fall line-up caught your eye? Is there anything you would recommend?

This week was all about banned books!

Have you ever slept with a favorite, beloved book under your pillow, or cradled in your arms?

The character least likely to run down the street would likely be the proper: Anne Elliot from Persuasion by Jane Austen. Or most of Jane Austen's characters, for that matter. Although maybe Lydia Bennett might . . .

The most likely character to run naked down the street is Harry Dresden from Jim Butcher's Dresden Files. Why? Because he did exactly it in the first book of the series.

Which character do you think is most or least likely to run naked down the street?