SEALs liked to say the only easy day was yesterday. ~ Opening of  Going Dark 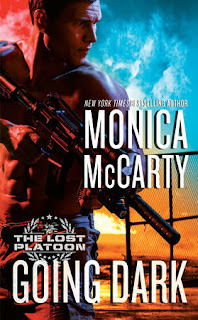 I have read three of Monica McCarty’s Highlander romance novels and was curious to try her new contemporary series featuring a Navy SEAL team. In this first book in the series, the reader discovers that a top secret mission of the SEALs has gone terribly wrong. As a result, they have scattered across the world and are in hiding, believed to be dead.

Marine Ecologist Annie Henderson is unaware of any of that when she travels to the Western Isles of Scotland with her boyfriend of 3 months to protest off-shore drilling. Her suspicions that something sinister is afoot and that there is more to the protest than she's been told turn into a horrific reality. she finds herself turning to the captain of the charter boat she and her friends have rented. Dan Warren (aka Dean) is secretive to a fault, but for some reason she feels like she can trust him. He, of course, is trying to stay under the radar, but soon realizes that getting involved with Annie will likely have the opposite effect.

While the attraction between the two protagonists is obvious from the first moment they meet, they do not hit it off well initially. Besides, Annie is in a relationship already. It is clear though that the relationship will be short lived—even Annie is doubting herself for traveling all the way to Scotland from the U.S. with a man she has only known a short time. It took me a moment to warm up to Annie, but eventually I did. I liked Dean’s character right away.

I liked the way the two interacted. They have very different ideas politically, which made for interesting conversations at times, but it was clear they respected each other’s opinions. In today’s political climate I sometimes feel like I fall far left, but in reading this book, I was reminded that I really am more moderate. That said, don’t think this book is heavy in politics. It isn’t at all, and the author does a good job of not really taking sides.

This falls into the insta-lust to love in a high stress situation and short amount of time romance category. I liked Annie and Dean together, but I was not completely sold that it was true love even by the end. While I found the eco-terrorist story line compelling, I was even more drawn into the lost platoon arc, wondering who had betrayed the team and what was going to happen from there. I imagine that will be a continued theme throughout the series. I enjoyed reading Going Dark. It was a nice change of pace after some heavier and sadder books I recently read. There was quite a bit of tension and suspense which made this a fast read.