I am in the middle of The Southern Book Club's Guide to Slaying Vampires by Grady Hendrix. I had not intended to dive into a book that falls on the dark side given my current mood, but upon the heels of my finishing Deanna Raybourn's A Curious Beginning, it seemed a serendipitous choice. I was on Twitter one evening and Deanna Raybourn commented on how much she enjoyed the book, and so I decided to read it. It really is hard to put down! 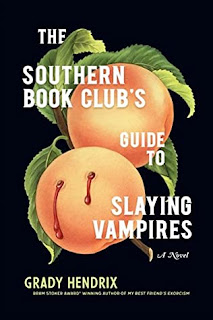 Fried Green Tomatoes and Steel Magnolias meet Dracula in this Southern-flavored supernatural thriller set in the '90s about a women's book club that must protect its suburban community from a mysterious and handsome stranger who turns out to be a blood-sucking fiend.

This story ends in blood. [opening of The Southern Book Club's Guide to Vampire Slaying]


My thoughts: Talk about a hook! What does Hendrix mean? I need to know more!

His face instantly closed up, and a steel door came down. "Don't you dare put this on me," he said. [excerpt from 56% of The Southern Book Club's Guide to Vampire Slaying]

My thoughts: I have not reached this point in the novel yet, and so am not sure what is going on, but knowing what comes before, I can guess it has a lot to do with a certain someone . . .


What do you think? Does this sound like something you would want to read? Have you read it? If you have, what did you think?

If you own an e-book, would you also purchase a print copy as well? (submitted by Tabatha @ Broken Soul Reviews)


I sometimes will buy a print copy of a book I own in e-format, particularly if I want to have a hard copy of that book for my keeper shelf. It does not happen often, but you know the book means a lot to me when it does.

On the flip side, I have been known to buy e-copies of books I own physical copies of just for of the convenience of reading them on my e-reader--especially if it is a big book (for example, War and Peace).

What about you? Have you ever purchased a print copy of an e-book you own?

This week's topic is My Favorite/Least Favorite Board Game!


My favorite board game (at least today) is Clue Master Detective. I guess it is no surprise since I enjoy reading mysteries so much.

My least favorite board game is Monopoly, which probably puts me in the minority given its popularity.

What is your favorite and least favorite board game?


I hope you all have a wonderful weekend! Be sure and tell me what you are reading and are up to! Stay safe and well.
© 2020, Wendy Runyon of Musings of a Bookish Kitty. All Rights Reserved. If you're reading this on a site other than Musings of a Bookish Kitty or Wendy's feed, be aware that this post has been stolen and is used without permission.
Posted by Literary Feline at 5/21/2020 09:00:00 PM