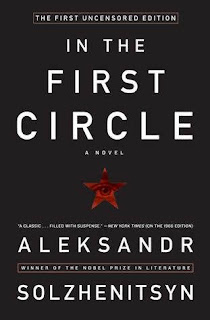 In the First Circle by Aleksandr Solzhenitsyn, translated by Harry Willets (Harper Perennial, 2009, originally published in 1968)

The thrilling cold war masterwork by the winner of the Nobel Prize in Literature, published in full for the first time

Moscow, Christmas Eve, 1949.The Soviet secret police intercept a call made to the American embassy by a Russian diplomat who promises to deliver secrets about the nascent Soviet Atomic Bomb program. On that same day, a brilliant mathematician is locked away inside a Moscow prison that houses the country's brightest minds. He and his fellow prisoners are charged with using their abilities to sleuth out the caller's identity, and they must choose whether to aid Joseph Stalin's repressive state—or refuse and accept transfer to the Siberian Gulag camps . . . and almost certain death.

First written between 1955 and 1958, In the First Circle is Solzhenitsyn's fiction masterpiece. In order to pass through Soviet censors, many essential scenes—including nine full chapters—were cut or altered before it was published in a hastily translated English edition in 1968. Now with the help of the author's most trusted translator, Harry T. Willetts, here for the first time is the complete, definitive English edition of Solzhenitsyn's powerful and magnificent classic. [Goodreads Summary]

Why I want to read this: I imagine this first intrigued me for being a classic thriller set during the Cold War. And maybe too because it had been originally censored--a word that always piques my interest. It's size (761 pgs) probably played a part in what has made it linger on my TBR shelf all time, but I'm still interested in reading it at some point.

Have you read In the First Circle? Does it sound like something you would be interested in? 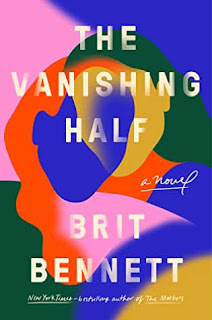 The Vanishing Half by Brit Bennett
Release Date: June 2, 2020 by Riverhead Books

From the New York Times -bestselling author of The Mothers, a stunning new novel about twin sisters, inseparable as children, who ultimately choose to live in two very different worlds, one black and one white.

The Vignes twin sisters will always be identical. But after growing up together in a small, southern black community and running away at age sixteen, it's not just the shape of their daily lives that is different as adults, it's everything: their families, their communities, their racial identities. Ten years later, one sister lives with her black daughter in the same southern town she once tried to escape. The other secretly passes for white, and her white husband knows nothing of her past. Still, even separated by so many miles and just as many lies, the fates of the twins remain intertwined. What will happen to the next generation, when their own daughters' storylines intersect?

Weaving together multiple strands and generations of this family, from the deep South to California, from the 1950s to the 1990s, Brit Bennett produces a story that is at once a riveting, emotional family story and a brilliant exploration of the American history of passing. Looking well beyond issues of race, The Vanishing Half considers the lasting influence of the past as it shapes a person's decisions, desires, and expectations, and explores some of the multiple reasons and realms in which people sometimes feel pulled to live as something other than their origins.

As with her New York Times-bestselling debut The Mothers, Brit Bennett offers an engrossing page-turner about family and relationships that is immersive and provocative, compassionate and wise. [Goodreads Summary]

Why I want to read this: Stories about twins have always interested me, but this one in particular calls even louder to me. The two women lead such different lives and I am curious about their history as well as their present, their family relationships and so much more. 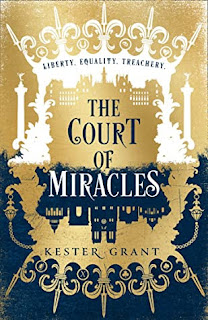 Les Misérables meets Six of Crows in this page-turning adventure as a young thief finds herself going head to head with leaders of Paris's criminal underground in the wake of the French Revolution.

In the violent urban jungle of an alternate 1828 Paris, the French Revolution has failed and the city is divided between merciless royalty and nine underworld criminal guilds, known as the Court of Miracles. Eponine (Nina) Thénardier is a talented cat burglar and member of the Thieves Guild. Nina's life is midnight robberies, avoiding her father's fists, and watching over her naïve adopted sister, Cosette (Ettie).

When Ettie attracts the eye of the Tiger--the ruthless lord of the Guild of Flesh--Nina is caught in a desperate race to keep the younger girl safe. Her vow takes her from the city's dark underbelly to the glittering court of Louis XVII. And it also forces Nina to make a terrible choice--protect Ettie and set off a brutal war between the guilds, or forever lose her sister to the Tiger. [Goodreads Summary]

Why I want to read this: Alternate history and the tie-in to my beloved Les Misérables are what make me want to read The Court of Miracles most. 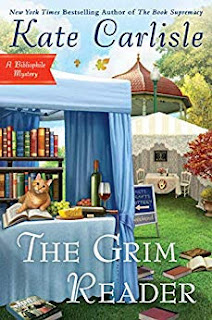 San Francisco book-restoration expert Brooklyn Wainwright was hoping for a fun, relaxing weekend at a local book fair, but a murderer made other plans in the latest in this New York Times bestselling series.

Brooklyn and her new hunky husband, Derek, are excited to be guests at Dharma’s first annual Book Festival. The entire town is involved and Brooklyn’s mom Rebecca is taking charge. In addition to all of her other event related duties, she’s got Brooklyn doing rare book appraisals and is also staging Little Women, the musical to delight the festival goers. If that wasn’t enough, she and Meg—Derek’s mom—will have a booth where they read palms and tarot cards.

Brooklyn couldn’t be prouder of her mom’s do-it-all attitude so when a greedy local businessman who seems intent on destroying Dharma starts harassing Rebecca, Brooklyn is ready to take him down. Rebecca is able to hold her own with the nasty jerk until one of her fellow festival committee members is brutally murdered and the money for the festival seems to have vanished into thin air. Things get even more personal when one of Brooklyn’s nearest and dearest is nearly run down in cold blood. Brooklyn and Derek go into attack mode and the pressure is on to catch a spineless killer before they find themselves skipping the festival for a funeral. [Goodreads Summary]

Why I want to read this:  I really enjoyed the one book in this cozy mystery series I read and look forward to reading more.