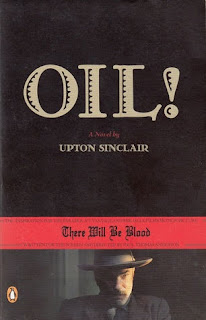 Sinclair's 1927 novel did for California's oil industry what The Jungle did for Chicago's meat-packing factories. In Oil! Upton Sinclair fashioned a novel out of the oil scandals of the Harding administration, providing in the process a detailed picture of the development of the oil industry in Southern California. Bribery of public officials, class warfare, and international rivalry over oil production are the context for Sinclair's story of a genial independent oil developer and his son, whose sympathy with the oilfield workers and socialist organizers fuels a running debate with his father. Senators, small investors, oil magnates, a Hollywood film star, and a crusading evangelist people the pages of this lively novel. [Goodreads Summary]

Why I want to read this: My interest in reading Oil! was piqued around the time the movie No Country For Old Men, based on the Cormac McCarthy novel of the same name, came out. I am not sure why the two are linked in my head, but they are somehow. Why am I suddenly thinking of milkshakes? Which is from an entirely different movie, There Will Be Blood, I think. Ah! Now it makes sense. There Will Be Blood is a film adaptation of Oil!, and it came out around the same time as No Country for Old Men. They both had a similar feel to them, if I remember right.  Crazy how the mind works sometimes, isn't it? There Will Be Blood made an impression on me at the time and got me curious about Sinclair's famous novel.

Have you read Oil!? Have you seen the movie adaptation called There Will Be Blood? Does this book sound like something you would like to read? 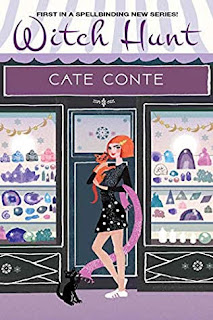 Violet Mooney owns The Full Moon crystal shop in quaint North Harbor, Connecticut. Still grieving her beloved grandmother’s recent unexpected death, she takes comfort in her fat orange cat Monty and her work. Not everyone in town is thrilled with her business, however. When disagreeable town councilwoman Carla Fernandez picks a fight over Violet’s "voodoo shop," the two have a very public confrontation. Of course, when Carla turns up dead, Violet gets little sympathy from the police as suspect #1.

But the shock of two policemen showing up at her door pales in comparison to the sudden appearance of her estranged mother Fiona and a surprise sister, Zoe. What Fiona reveals will rock her world and her sense of self—and reawaken her long-dormant mysterious power. Good thing. She’s gonna need it . . . [Goodreads Summary]

Why I want to read this: This is my favorite kind of cozy mystery--a mix of mystery and magic. And there's a cat! Of course there is a cat. 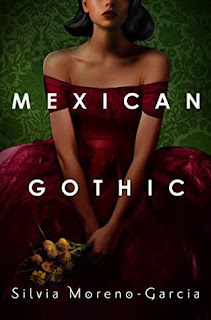 From the author of Gods of Jade and Shadow comes a reimagining of the classic gothic suspense novel, a story about an isolated mansion in 1950s Mexico -- and the brave socialite drawn to its treacherous secrets.

He is trying to poison me. You must come for me, Noemí. You have to save me.

After receiving a frantic letter from her newly-wed cousin begging for someone to save her from a mysterious doom, Noemí Taboada heads to High Place, a distant house in the Mexican countryside. She’s not sure what she will find -- her cousin’s husband, a handsome Englishman, is a stranger, and Noemí knows little about the region.

Noemí is also an unlikely rescuer: She’s a glamorous debutante, and her chic gowns and perfect red lipstick are more suited for cocktail parties than amateur sleuthing. But she’s also tough, smart, and has an indomitable will, and she is not afraid: Not of her cousin’s new husband, who is both menacing and alluring; not of his father, the ancient patriarch who seems to be fascinated by Noemí; and not even of the house itself, which begins to invade Noemi’s dreams with visions of blood and doom.

Her only ally in this inhospitable abode is the family’s youngest son. Shy and gentle, he seems to want to help Noemí, but might also be hiding dark knowledge of his family’s past. For there are many secrets behind the walls of High Place. The family’s once colossal wealth and faded mining empire kept them from prying eyes, but as Noemí digs deeper she unearths stories of violence and madness.

And Noemí, mesmerized by the terrifying yet seductive world of High Place, may soon find it impossible to ever leave this enigmatic house behind. [Goodreads Summary]

Why I want to read this: This has been featured on several other blogs over the last couple months, and no wonder! It sounds like it will be really good. 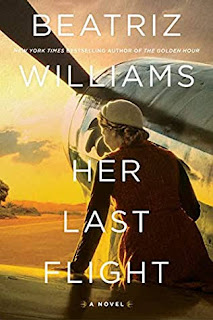 The beloved author returns with a remarkable novel of both raw suspense and lyric beauty— the story of a lost pilot and a wartime photographer that will leave its mark on your soul.

In 1947, photographer and war correspondent Janey Everett arrives at a remote surfing village on the Hawaiian island of Kauai to research a planned biography of forgotten aviation pioneer Sam Mallory, who joined the loyalist forces in the Spanish Civil War and never returned. Obsessed with Sam’s fate, Janey has tracked down Irene Lindquist, the owner of a local island-hopping airline, whom she believes might actually be the legendary Irene Foster, Mallory’s onetime student and flying partner. Foster’s disappearance during a round-the-world flight in 1937 remains one of the world’s greatest unsolved mysteries.

At first, the flinty Mrs. Lindquist denies any connection to Foster. But Janey informs her that the wreck of Sam Mallory’s airplane has recently been discovered in a Spanish desert, and piece by piece, the details of Foster’s extraordinary life emerge: from the beginnings of her flying career in Southern California, to her complicated, passionate relationship with Mallory, to the collapse of her marriage to her aggressive career manager, the publishing scion George Morrow.

As Irene spins her tale to its searing conclusion, Janey’s past gathers its own power. The duel between the two women takes a heartstopping turn. To whom does Mallory rightfully belong? Can we ever come to terms with the loss of those we love, and the lives we might have lived? [Goodreads Summary]

Why I want to read this: Historical fiction featuring a female protagonist is among my favorite type of book, and Beatriz Williams is an author whose work I have enjoyed in the past. I cannot wait to meet Janey.