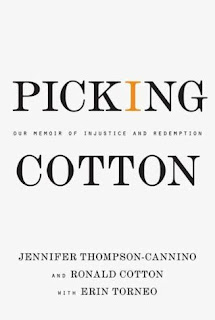 Jennifer Thompson was raped at knifepoint by a man who broke into her apartment while she slept. She was able to escape, and eventually positively identified Ronald Cotton as her attacker. Ronald insisted that she was mistaken-- but Jennifer's positive identification was the compelling evidence that put him behind bars. After eleven years, Ronald was allowed to take a DNA test that proved his innocence. He was released, after serving more than a decade in prison for a crime he never committed. Two years later, Jennifer and Ronald met face to face-- and forged an unlikely friendship that changed both of their lives.
In their own words, Jennifer and Ronald unfold the harrowing details of their tragedy, and challenge our ideas of memory and judgment while demonstrating the profound nature of human grace and the healing power of forgiveness. [Goodreads Summary]

Why I want to read this: I added this to my TBR pile soon after it came out. I have always been interested in memory and crime, but there is also a racial aspect to this particular incident that is important to note as well. I am curious to see how that is addressed by the authors. I am glad Jennifer and Ronald were able to become friends, and Ronald was able to forgive Jennifer. That truly is amazing given all he had lost.
Have you read Picking Cotton? Does this book sound like something you would like to read? 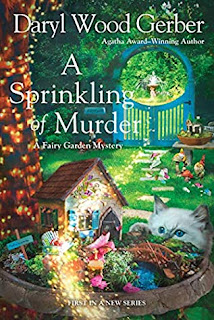 A Sprinkling of Murder (A Fairy Garden Mystery #1) by Daryl Wood Gerber
Release Date: June 30, A 2020 by Kensington


Fairy garden store owner Courtney Kelly believes in inviting magic into your life. But when uninvited trouble enters her shop, she'll need more than a sprinkling of her imagination to solve a murder . . .

Since childhood, Courtney has loved fairies. After her mother died when Courtney was ten, she lost touch with that feeling of magic. A year ago, at age twenty-nine, she rediscovered it when she left her father's landscaping business to spread her wings and start a fairy garden business and teashop in beautiful Carmel, California. At Open Your Imagination, she teaches garden design and sells everything from fairy figurines to tinkling wind chimes. Now she's starting a book club tea.

But the light of the magical world she's created inside her shop is darkened one night when she discovers neighboring dog-grooming business owner Mick Watkins dead beside her patio fountain. To make matters worse, the police suspect Courtney of the crime. To clear her name and find the real killer, Courtney will have to wing it. But she's about to get a little help from an unexpected source . . . [Goodreads Summary]

Why I want to read this: Did  I see mention of a book club? This cozy promises a bit of magic mixed in with the mystery, a combination I cannot resist. 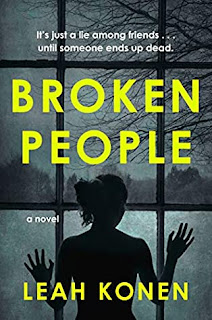 
A woman in search of a fresh start is about to get more than she bargained for in this twisty and addictive domestic thriller for fans of The Couple Next Door.

Lucy King is desperate for escape: from a dangerous relationship, a city she can no longer call home, and a past she just wants to forget. Fleeing Brooklyn with little more than a suitcase and her trusty dog, she heads to rustic, charming Woodstock, New York, eager to lose herself in a quiet, anonymous life where her ex can never find her. But when she meets Vera and John, the alluring couple next door, their friendship proves impossible to resist. Just as Lucy starts to think the worst is behind her, the couple delivers a staggering bombshell: they, too, need to escape their troubles--and the only way they can begin their new life is if Lucy helps them fake John's death.

Afraid to lose her newfound support system--and still panicked about her ex--Lucy reluctantly conspires with them to stage an "accidental" death on a hike nearby. It's just one little lie to the police, after all, and she knows a thing or two about the importance of fresh starts. But what begins as an elaborate ruse turns all too real when John turns up dead in the woods the morning after their hike. Now, Lucy must figure out who she can trust and who's pulling the strings of her tenuous new life . . . before she takes the fall for murder.  [Goodreads Summary]

Why I want to read this: Lucy cannot seem to catch a break, can she? Running from her past and now to find herself in the middle of a con gone wrong. This sounds like it will be a page turner. 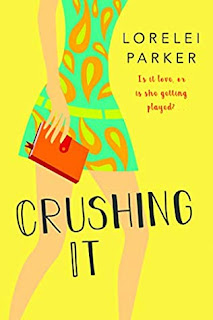 Crushing It by Lorilei Parker
Release Date: June 30, 2020 by Kensington

To pitch her new role-playing game at a European conference, developer Sierra Reid needs to overcome her terror of public speaking. What better practice than competing in a local bar’s diary slam, regaling an audience with old journal entries about her completely humiliating college crush on gorgeous Tristan Spencer?

Until the moderator says, “Next up, Tristan Spencer . . .”

Sierra is mortified, but Tristan is flattered. Caught up in memories of her decade-old obsession as they reconnect, Sierra tries to dismiss her growing qualms about him. But it’s not so easy to ignore her deepening friendship with Alfie, the cute, supportive bar owner. She and Alfie were college classmates too, and little by little, Sierra is starting to wonder if she’s been focusing her moves on the wrong target all along, misreading every player’s motivations.

Maybe the only winning strategy is to start playing by her heart . . . [Goodreads Summary]

Why I want to read this: Sometimes a romance novel is just what I need and this one came onto my radar because the main character is a role-playing game developer.