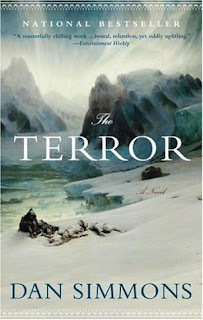 The men on board HMS Terror have every expectation of triumph. As part of the 1845 Franklin Expedition, the first steam-powered vessels ever to search for the legendary Northwest Passage, they are as scientifically supported an enterprise as has ever set forth. As they enter a second summer in the Arctic Circle without a thaw, though, they are stranded in a nightmarish landscape of encroaching ice and darkness. Endlessly cold, with diminishing rations, 126 men fight to survive with poisonous food, a dwindling supply of coal, and ships buckling in the grip of crushing ice. But their real enemy is far more terrifying. There is something out there in the frigid darkness: an unseen predator stalking their ship, a monstrous terror constantly clawing to get in.

When the expedition's leader, Sir John Franklin, meets a terrible death, Captain Francis Crozier takes command and leads his surviving crewmen on a last, desperate attempt to flee south across the ice. With them travels an Inuit woman who cannot speak and who may be the key to survival, or the harbinger of their deaths. But as another winter approaches, as scurvy and starvation grow more terrible, and as the terror on the ice stalks them southward, Crozier and his men begin to fear that there is no escape. [Goodreads Summary]

Why I want to read this: I am fairly sure this landed on my TBR pile after I was gifted a copy of Simmons' Drood (which I still have yet to read). Drood was the talk of the blogosphere at that time (2009), and I kept coming across praise of Simmons's earlier book, The Terror. So, it landed on my TBR shelf as well because it sounded interesting.
Have you read The Terror? Does this book sound like something you would like to read? 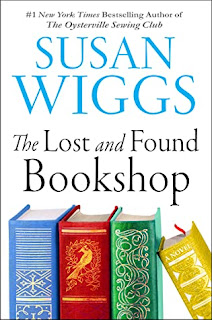 
In this thought-provoking, wise and emotionally rich novel, New York Times bestselling author Susan Wiggs explores the meaning of happiness, trust, and faith in oneself as she asks the question, "If you had to start over, what would you do and who would you be?"

Somewhere in the vast Library of the Universe, as Natalie thought of it, there was a book that embodied exactly the things she was worrying about.

In the wake of a shocking tragedy, Natalie Harper inherits her mother’s charming but financially strapped bookshop in San Francisco. She also becomes caretaker for her ailing grandfather Andrew, her only living relative—not counting her scoundrel father.

But the gruff, deeply kind Andrew has begun displaying signs of decline. Natalie thinks it’s best to move him to an assisted living facility to ensure the care he needs. To pay for it, she plans to close the bookstore and sell the derelict but valuable building on historic Perdita Street, which is in need of constant fixing. There’s only one problem–Grandpa Andrew owns the building and refuses to sell. Natalie adores her grandfather; she’ll do whatever it takes to make his final years happy. Besides, she loves the store and its books provide welcome solace for her overwhelming grief.

After she moves into the small studio apartment above the shop, Natalie carries out her grandfather’s request and hires contractor Peach Gallagher to do the necessary and ongoing repairs. His young daughter, Dorothy, also becomes a regular at the store, and she and Natalie begin reading together while Peach works.

To Natalie’s surprise, her sorrow begins to dissipate as her life becomes an unexpected journey of new connections, discoveries and revelations, from unearthing artifacts hidden in the bookshop’s walls, to discovering the truth about her family, her future, and her own heart. [Goodreads Summary]

Why I want to read this: San Francisco. A bookshop. Hidden artifacts. Romance. Everything about this book screams, "Read me now!" 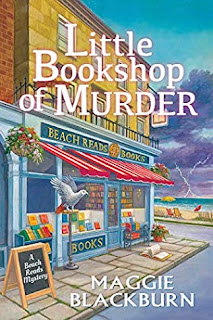 
A Shakespearean scholar inherits a beachside bookshop--and a murder mystery--in this delightful new cozy series for fans of Kate Carlisle and Ellery Adams.

Summer Merriweather's career as a Shakespeare professor hangs by a bookbinder's thread. Academic life at her Virginia university is a viper's pit, so Summer spends her summer in England, researching a scholarly paper that, with any luck, will finally get her published, impress the Dean, and save her job. But her English idyll ends when her mother, Hildy, shuffles off her mortal coil from an apparent heart attack.

Returning to Brigid's Island, NC, for the funeral, Summer is impatient to settle the estate, sell her mom's embarrassingly romance-themed bookstore, Beach Reads, and go home. But as she drops by Beach Reads, Summer finds threatening notes addressed to Hildy: "Sell the bookstore or die."

Clearly, something is rotten on Brigid's Island. What method is behind the madness? Was Hildy murdered? The police insist there's not enough evidence to launch a murder investigation. Instead, Summer and her Aunt Agatha screw their courage to the sticking place and start sleuthing, with the help of Hildy's beloved book club. But there are more suspects on Brigid's Island than are dreamt of in the Bard's darkest philosophizing. And if Summer can't find the villain, the town will be littered with a Shakespearean tragedy's worth of corpses--including her own. [Goodreads Summary]

Why I want to read this: A beachside bookshop? A Shakespearean scholar? And Murder! This sounds like a promising start to a new cozy mystery series. 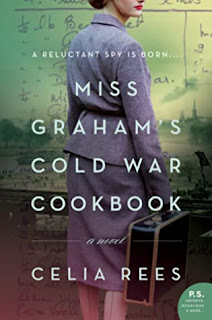 
A striking historical novel about an ordinary young British woman sent to uncover a network of spies and war criminals in post-war Germany that will appeal to fans of The Huntress and Transcription.

World War II has just ended, and Britain has established the Control Commission for Germany, which oversees their zone of occupation. The Control Commission hires British civilians to work in Germany, rebuild the shattered nation and prosecute war crimes. Somewhat aimless, bored with her job as a provincial schoolteacher, and unwilling to live with her stuffy genteel parents any longer, twentysomething Edith Graham applies for a job with the Commission—but is instead recruited by the OSS. To them, Edith is perfect spy material…single, ordinary-looking, with a college degree in German. And there’s another thing—the OSS knows that Edith’s brother went to Oxford with one of their most hunted war criminals, Count Kurt von Stabenow, who Edith remembers all too well from before the war.

Intrigued by the challenge, Edith heads to Germany armed with a convincing cover story: she’s an unassuming schoolteacher sent to help resurrect German primary schools. To send information back to her OSS handlers in London, Edith has crafted the perfect alter ego, cookbook author Stella Snelling, who writes a popular magazine cookery column that embeds crucial intelligence within the recipes she collects. But occupied Germany is awash with other spies, collaborators, and opportunists, and as she’s pulled into their world, Edith soon discovers that no one is what they seem to be. The closer she gets to uncovering von Stabenow’s whereabouts—and the network of German civilians who still support him—the greater the danger.

Why I want to read this: Historical fiction is one of my favorite genres, and I especially cannot resist a female lead in a nontraditional role. Set during World War II, this novel is a must read for me.