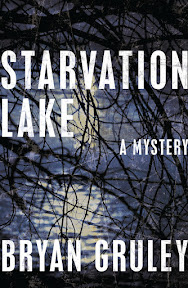 The cast-iron railing wobbled in his hand as he climbed the porch steps. He nearly fell over. After three tries, he decided the doorbell didn't work. The screen wouldn't give, so he striped off a glove and rapped on the aluminum frame. Paint the color of pea soup was peeling off the face of the inside door. [1st paragraph]


Gus Carpenter left Starvation Lake to make a name for himself and to exonerate himself for a shame that had been lain on his shoulders when he was a boy playing hockey. He'd nearly done it too, but circumstances landed him back in his hometown, his image and reputation as a newspaper reporter tarnished. He works as an editor for the local paper in town, where his bosses prefer softer news to hard hitting stories. When new evidence surfaces about the death of his childhood hockey coach who had died many years before, several people in Starvation Lake would rather leave the past in the past. What was perceived as an accident all those years ago, is now being investigated as a murder. The more Gus discovers, the more he realizes just how little he knew his coach--and several of the other townsfolk.

I went into the novel hoping for a fast-paced read but found the book to be slow going at first. The author took his time setting the background and preparing the reader for what was to come. I was never bored, however. I settled into the novel and let it suck me in. And suck me in it did. While the mystery is significant to the novel, so are the relationships and side stories presented on the pages of the book.

The sense of place is strong throughout the novel. Starvation Lake by name alone doesn't sound like an inviting place to live, but it is a beautiful mountain lakeside town like many others (in my own reading and visualization of the town, it was like a mountain town, but CJ pointed out in her comment it isn't one. I've never been to Michigan and so have no reference--I tend to pull images out of my own memory or from pictures I've seen. When I read the next book I'll try and think Lake Elsinore instead of Lake Tahoe.). The name of the town is quite fitting in some respects--more than just for the reason given in the novel. The town has suffered its share of financial woes and is struggling to stay afloat. Business is hurting. The town is also full of secrets, some darker than others.

As the story unfolded, it picked up speed and came together in a satisfying way. I feel like I was right there, alongside the characters. Each of the characters was fully developed, none without their own flaws. I liked the fact that the novel had so many layers to it. I am really curious about the author's next book in the series and hope to read it soon.

Source: My copy of Starvation Lake was provided by the publisher for review.