Reviews: Deeper Than the Dead & Secrets to the Grave by Tami Hoag

When offered the opportunity to be a part of the TLC Tour for Secrets to the Grave, I was also offered a copy of the first book in the micro-series, Deeper Than the Dead. It had been years since I last read a Tami Hoag novel, and her most recent books sounded like they would be right up my alley. 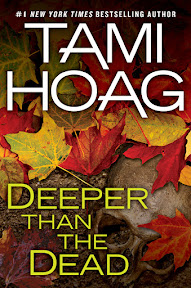 Four children stumble on a mutilated dead body in the woods after school one day. Their lives are changed forever, as are the lives of many others in the small college town of Oak Knoll. FBI agent Vince Leone with the Behavioral Science Unit joins local law enforcement to investigate what appears to be the latest serial killing. Time is short as they try to find a missing woman before her fate is sealed.

Anne Navarre is a fifth grade teacher and finds herself thrown into the middle of it all. The four children who had found the body are in her class. She is determined to be there for them; only, she gets more than she bargained for.

There is a lot going on in the lives of the characters and nothing is quite as it seems. The novel is set in 1985, a time when profiling was still new and not always accepted. Computers were scarce and DNA a thing of the future. The author adds bits of pop culture subtly throughout the novel to help ground the story to the time and place.

I really came to care about Anne and her students. While the discovery of the body seemed to set off a chain of events out of everyone's control, much of the discord in the children's lives had existed long before. Anne is the kind of teacher I would want for my child. She knows them well and wants only what is best for them. She is protective when necessary and not afraid to advocate for them.

Deeper Than the Dead moves at a fast clip, especially towards the end as the mystery unfolds. It was at times intense and I couldn't wait to find out what happened next. Having read a lot of serial killer novels and about profiling in general, it wasn't difficult to eliminate suspects, but that's never stopped me from enjoying a thriller. 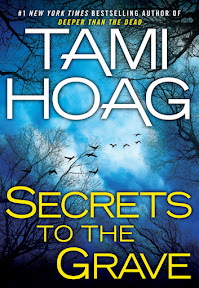 On the heels of finishing Deeper Than the Dead, I dived into the sequel, Secrets to the Grave. For those who aren't sticklers about reading series books in order, I would recommend you do so in this case. While Secrets to the Grave could be read as a stand alone (the author does a good job filling in the back story), there are significant characters and storylines that carry over.

Secrets to the Grave opens with a grisly murder scene. A four year old girl is found barely alive next to her dead mother. Set a year after the first book in the micro-series, the physical and emotional wounds from the serial killings are still raw but on their way to healing. Then to have a respected up-and-coming artist brutally murdered and an attempt made on her young daughter's life, the small college community finds itself upside down again in grief.

The nature of the crime points to a very personal kind of attack--someone who knew the victim. The local sheriff and his investigators don't hesitate to call in former FBI profiler Vince Leone to help. Anne's gift with children is put to its ultimate test when she reaches out to four year old Haley, the only witness and survivor to the horrific crime. Anne must not only try and help Haley, but she must battle the wealthy godmother who wants custody of Haley. As a result, she is forced to sacrifice some of the time she was spending with a very disturbed 12 year old, who, save for her, the world has given up on. This brings about its own consequences.

Tami Hoag has created a setting and characters that remind me of a cozy mystery--a small town with sometimes eccentric but always interesting characters--but make no mistake. These books are not cozies. They are at times dark and violent.

Like with the first book in the series, there is a lot going on in Secrets to the Grave. The lives of the characters and their histories are tightly woven into the plot and subplots. I especially like the team aspect of the novel--that it isn't one person solving the crime, but rather a group of people, working together. The author also shows varying aspects of violent crime, including the emotional impact it has on a community as well as the individuals.

I did like the first book slightly more than this second book. There were certain markers that were more obvious in Secrets to the Grave that led me to figure out who did what sooner. Even so, I enjoyed the novel and spending more time with the characters. There is more I would like to say about this second book, about its characters, but I don't want to give away too much or else I'll spoil the first book. Besides, I think you should find out for yourselves!

You can learn more about Tami Hoag and her books on the author's website. You can also find her on Facebook. I hope you will check out what others had to say on the TLC Book Tours route!

Many thanks to the TLC Book Tours for the opportunity to be a part of this book tour. Books for review provided by the publisher.