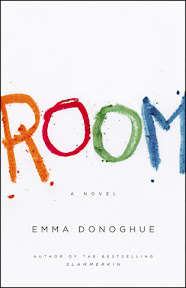 Today I'm five. I was four last night going to sleep in Wardrobe, but when I wake up in Bed in the dark I'm changed to five, abracadabra. Before that I was three, two, one, then zero. [excerpt from opening paragraph]

Emma Donoghue's Room has received much praise from critics and bloggers. As with any book that is raved about, I find myself both excited to dive in and reluctant that all the hype will leave me disappointed. I was curious about Room, especially given it is written from the perspective of a five year old whose world view is limited to that of the room he and his mother are imprisoned in. Jack's mother was kidnapped, locked in a garden shed for several years, giving birth to her rapist's son during that time.

The novel opens on Jack's fifth birthday. He knows very little about the outside world. What he does know comes from the stories his mother tells him, what he sees on television, and is in the books he reads. To him, all that is fiction. His mother has made the most of their situation, teaching Jack to read and write and do math. Jack is a very intelligent boy for his age in that regard.

While I enjoyed the first part of the book, getting to know Jack, his mother, and the world they lived in, it wasn't until the second part that I really became fully invested in the story and hated to put it down.

It began with the escape plan and built from there. The entire sequence of events was intense, from the moment Jack is wrapped up in the blanket to the moment he is in his mother's arms again after the police find her.

I was especially interested in seeing how the author would handle Jack's entry into the real world. It wasn't just about his experience, but about his mother's as well. Told from Jack's perspective, it provided an interesting dimension to the story, but his mother's struggle with re-entry was just as difficult. I especially liked the juxtaposition of how she wanted to put her captivity and everything about it behind her while Jack missed his old life. The author did a good job of capturing the psychological intricacies involved.

It's been a long time since I was last around a five year old, and so I'm not the best person to say whether Donoghue correctly captured the voice of a child that age. Given his upbringing, how much knowledge he had and how little he knew of the outside world, I had no trouble buying into Jack's character and situation. I really came to feel for him and his mother and everything they had to go through.

I liked the book quite a bit and appreciate the author's approach to such a dark story, especially the way she crafted her characters and all of their nuances. Her description of Room in Jack's eyes was well done. Still, I didn't come away loving the book quite as much as others. I can't pin my finger on exactly why. Perhaps the more I think on it, it will come to me . . .

You can learn more about Emma Donoghue and her books on the author's website.