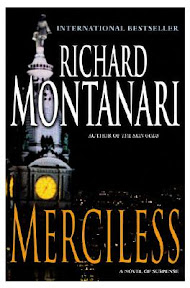 First Sentence: In his dream they are still alive.

Reason for Reading: This is a Curled Up With A Good Book selection, and the second series I have managed to get all caught up on for Kathrin's Series Challenge. Comments: Merciless is author Richard Montanari’s third novel featuring homicide Detectives Kevin Byrne and Jessica Balzano. When homicide Detective Kevin Byrne spots a dangerous fugitive in a diner one evening, he knows he must act. Unfortunately for Byrne, the wanted man also spots him, and the events that follow quickly turn deadly. This was not exactly how Byrne wanted to finish out what had been a peaceful vacation.

It does not take long before Byrne and his partner, Detective Jessica Balzano, get a call about a body found on the bank of the Schuylkill River. They had been heading out to investigate a cold case, when an anonymous tip came in about the dead woman. They quickly change their plans and head for the crime scene, braving the cold winter weather. The body is clearly posed, sitting on the bank as if looking out at the river clothed only in what appears to be a vintage dress much too big for the woman wearing it. As the evidence is gathered, the mystery deepens.

When a second body is discovered and evidence points to the same killer, the detectives begin to worry that they have a serial killer on their hands. They are still nowhere closer to knowing who may have killed Karen, the first victim, and so the hunt continues and the stakes grow higher. Murder does not wait for one investigation to finish before another begins, and true to form, the brutal murder of a just-retired detective has everyone on edge. The already short-staffed homicide division is stretched to its limit as the two high profile cases are investigated. The media attention is an added weight the police do not really need, much less want.

Richard Montanari is careful in his details, not wanting to give anything away too soon. He is good at obfuscating the truth right until the very end. Certain themes can be found running through the novel, most particularly the way past cases and past horrors continue to haunt and impact the present. There is no getting away from it and no real way to avoid it.

Detectives Byrne and Balzano have worked together for several years now, and the reader falls quickly into their rhythm. Jessica is a young mother, balancing work, marriage and motherhood. Byrne is a divorced father, burdened by past cases and old nightmares. The killer himself is an interesting character, a wounded and delusional man. He is quite intriguing, his motives somewhat obvious and yet still quite hazy as the story unfolds.

One of the draws of Richard Montanari’s book is the setting. Philadelphia is more than just a place name in the author’s recent novels, and that holds true with this latest novel, Merciless, in which not only the city, but the winter season play important roles in the novel. The city is as much a character as the people themselves, and the wintry weather has a voice of its own.

Merciless takes readers in a number if different directions and there is a lot of set up, threatening to bog down the story at times, but never quite doing so. Once the pieces begin to fall into place, the novel takes off and there is no going back. Although this is not his strongest novel, Richard Montanari continues to be a master storyteller, and Merciless is well worth reading. Originally published on Curled Up With A Good Book at www.curledup.com. © Wendy Runyon, 2008.

An Observation: Perhaps it is simply because this season’s The Wire focuses on the media that I am more attuned to their role in police investigations right now, but I was constantly aware throughout Montanari’s novel of the media attention the police received and the pressure they felt under the media’s ever watchful gaze. Although no reporters or specific persons from the media were named or brought into focus, media in general was a background character throughout the novel, hovering, waiting, and ready to pounce on any information they could discover.

Miscellaneous: Today is Super Tuesday in the U.S.A. and my state just happens to be one of the states joining in on the election fun. I actually voted last Thursday by absentee ballot, and so that's one less thing I have to worry about today. I hope that if you are American and have an election taking place in your area, you will take the time to vote if you have not already.
Posted by Literary Feline at 2/05/2008 06:30:00 AM