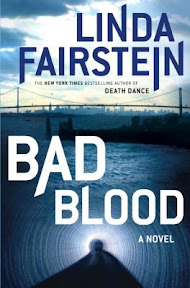 
First Sentence: I was alone in the courtroom, sitting at counsel’s table with a single slim folder opened before me.

Reason for Reading: Alex Cooper and I go way back. I enjoy the author’s series and thought this one would be a good one to read on toward putting another notch on my belt for Kathrin's Series Challenge.

Comments: I admit that I was not too impressed with Final Jeopardy, the first book in the Alexandra Cooper series, however, after reading an article about the author in a book magazine that detailed her career as both a prosecutor with the district attorney’s office in Manhattan and a writer, I decided to give her another try. The series has become one of my favorites over the years, each book getting better and better as the characters grow and evolve.

Bad Blood is the 9th book in the Alexandra Cooper, assistant district attorney in New York City, series. Alex Cooper is about as ready as she can be in her recent case. The daughter of a successful businessman, Amanda Quillian, was strangled in her upscale townhouse, and her husband, Brendan, is on trial for her murder. He has hired one of the most prominent defense attorneys in the area, and his attorney is not about to let anything slip by him without a fight.

An explosion in a New York water tunnel shakes the city barely a week into the trial, killing three men. Police rush in to determine whether the explosion was an accident or intentional. After the Twin Towers bombing, any explosion or threat to the city is taken even more seriously than ever before. The threat of terrorism is very real. Pulled into the investigation by a strange twist that may or may not be related to the defendant she has on trial, Alex is soon traveling over 600 feet into the earth and into parts of New York she did not know existed. Nothing is quite what it seems and the deeper she digs, the more dangerous things become. Joined by her sidekicks, homicide Detective Mike Chapman and Detective Mercer Wallace, Alex is sure she can uncover the truth.

One of my favorite features in Linda Fairstein’s is how the author takes a piece of New York history and weaves it into her modern day murder thriller. In Bad Blood, she takes readers underground, into New York City’s water system and subway tubes sharing their history and also offering a glimpse into the dangerous work of the sandhogs, the people who work in the tunnels.

Bad Blood is one of those fast-paced stay up late novels. Linda Fairstein has succeeded in writing another legal thriller that is pure entertainment and fun.