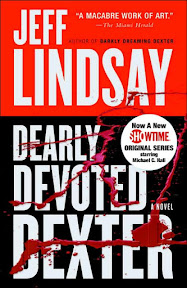 First Sentence: It's that moon again, slung so fat and low in the tropical night, calling out across a curdled sky and into the quivering ears of that dear old voice in the shadows, the Dark Passenger, nestled snug in the backseat of the Dodge K-car of Dexter's hypothetical soul.

Reason for Reading: This is one of the four books I had selected to read after finishing Eragon. It was calling my name, and it helps that it’s another series I can say I’m all caught up with before the end of the year.

Comments: Dearly Devoted Dexter is the second book in this unusual series. The main character and narrator of these darkly humorous but at times gruesome novels is Dexter Morgan, a blood splatter expert for the Miami Police Department, who also just happens to be a serial killer. Raised and mentored by his police officer foster father, Dexter only targets “deserving” victims, other predators who prey on the innocent.

This time around, Dexter’s patience is put to the ultimate test when he has to suppress his killing urges and lead as normal a life as possible. His archenemy, Sergeant Doakes, is determined to catch Dexter red handed and so begins to follow him around, watching his every move. Just when Dexter begins to believe he’ll have to settle into his role as a beer drinking coach potato, a mutilated body is discovered. Dexter’s curiosity at the cleanliness and uniqueness of the crime is peaked instantly. When his sister is assigned to work the case with Chutsky, a Fed working for an unknown agency in Washington D.C., Dexter has the perfect in to learn more about the crime and perhaps even go on a little hunt of his own.

Do I dare admit that there were several moments during my reading of Dearly Devoted Dexter when I was laughing out loud? The novel is full of dark humor, however, the subject matter can be disturbing at times. Jeff Lindsay’s character Dexter Morgan is witty and charming. Dexter is a likeable character who can easily spark empathy in the reader, although it should never be forgotten how dangerous he is. He is a ruthless and methodical killer. Jeff Lindsay makes sure the reader does not forget that.

Dexter’s sister, Deborah offers Dexter balance in many respects. She’s sort of his conscience, helping to keep him on track, which she has to do many times in this particular novel. And then there is Rita, Dexter’s girlfriend, and her children, Cody and Astor. The family seems to adore Dexter and he is peculiarly drawn to them, especially the children.

Dearly Devoted Dexter hit the spot. It seemed to be the perfect reading choice for this moment in time. I eagerly await the third installment in the series, Dexter in the Dark, which is scheduled for release in August of next year.

Favorite Part: I just love Jeff Lindsay’s dark humor. Dexter’s quite a character. My favorite scene in the novel was when Dexter caves in and drinks the beer his girlfriend Rita offers him. He doesn’t just stop with one and what follows was a comical scene.

Least Favorite Part: There were two very clear parts of this novel that I did not care for, although, after much thought, I think it goes along with my earlier point that the author does not want readers to forget who—and what—Dexter is. Because I don’t want to spoil the book, I will not actually say what those two parts are. I’m such a tease, aren’t I?

Miscellaneous: Showtime is running a TV series based on the Dexter character, of which I’ve seen the first episode. I do not subscribe to Showtime, I’m afraid and so haven’t seen any episodes beyond that.
Posted by Literary Feline at 12/09/2006 10:53:00 PM