Review of Forgetfulness by Ward Just 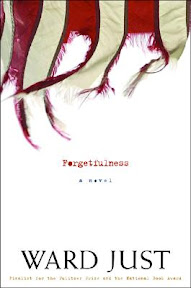 First Sentence: The way down was hard, the trail winding and slick underfoot, insecure.

Reason for Reading: The synopsis of the book interested me. It fit with the mood I was in when I was looking over the choices of books I could review for Curledup.com.

Comments: While her husband visits with his two American friends after dinner, Florette decides to take a walk along one of her favorite paths in the Pyrenees Mountains near their home. She suddenly finds herself at the mercy of four unknown travelers when she falls and breaks her ankle. Although very reluctant to offer aid, the men put her on stretcher and begin their journey again. As the bitter cold and rough terrain make the trip even more uncomfortable, Florette recalls her life before and after meeting Thomas. She thinks of the dreams she never achieved and of the happiness she has found in life. Unfortunately for Florette, her rescuers turn out to be her murderers.

Thomas Railles, a painter who at one time gathered information for the CIA, is devastated by the loss of his wife. Thomas wanders through the house, trying just to survive and keep hold of his memories of Florette. He does not want to let go. He does not want to forget. And in his remembering, memories of his life become more vivid: his final meeting with the Spaniard, his games of billiards with his English neighbor, his childhood, the start of his career in New York, his first love, and his life with Florette. He blames himself for his wife’s murder, wondering if he could have prevented her death had he noticed she’d left and not returned sooner. Thomas is ambiguous about pursuing the investigation into his wife’s murder, but the two Americans, friends since childhood, will not let go of it so easily, especially Bernhard.

It is Bernhard who convinces Thomas to attend the interrogation of the men who murdered Florette, despite Thomas’ mixed feelings. When confronted with the man who killed his wife, Thomas is not sure what to do or what to think. A part of him only wants to forget, there is the part feels anger and wants revenge and yet another part feels some relief at knowing something of the truth as to what happened.

Forgetfulness is a novel about one man’s journey through the grief after his wife’s tragic death. Thomas seemed numb through most the book. His love for Florette was clear and the impact of her death took a heavy toll on him just the same. His art seemed to seep up the passion he was unable to release. He felt angry, sad and yet he rarely expressed himself. His two childhood friends, Russ and Bernhard, were less closed with their emotions, Russ going through his own family tragedy and Bernhard holding onto his passion for his work, the only thing that really seemed to have value in his life.

Author Ward Just’s descriptions and use of language flow beautifully across the pages. Like his main character, Mr. Just is an artist, painting a portrait of Thomas and of Florette. In the background, Ward Just subtly brings up the topic of the Americans’ war on terror and the impact it has on the world, including the French, the society in which expatriate Thomas Railles has settled. The four men who were with Florette in her final hours are believed to be terrorists of sorts, although the novel is not really about that at all. Forgetfulness was not quite what I expected when I first picked it up to read; it was so much more. Originally published on Curled Up With A Good Book at www.curledup.com. © Wendy Runyon, 2006

Favorite Part: It is about “Lebenslüge, the lie that makes life bearable.” The whole concept of Lebenslüge, I found interesting and so true: the idea that people lie to themselves and to others to make their own lives easier to live, less painful.

I most loved the way Ward Just told the story, bringing his characters to life through their memories. He did so in such a real and beautiful way. I was most fascinated by Granger’s character and wish I could have gotten to know him better, learned more about his secrets. Still, keeping them hidden was part of the success of the book, I think.

Miscellaneous: The holiday decorations went up the first weekend of December and most of the gifts are sitting in the TBR room all wrapped and ready to be opened. As hubby and I were putting up the tree, the cat had already staked out his branch, climbing right in. It’s going to be a nice Christmas this year.
Posted by Literary Feline at 12/21/2006 06:00:00 PM