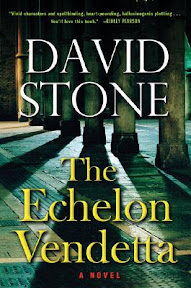 First Sentence: At six minutes after midnight everything changed: Runciman sensed it, even in his drunken sleep.

Reason for Reading: I came across this title on the list of books waiting to be reviewed for the Curledup.com site and decided it sounded interesting enough to try. It was one of three that somehow was tied into the spy novel theme I was in the mood for when I was selecting my last batch of review books.

Comments: The Echelon Vendetta is due to hit stores this coming February. Out of a wide selection of books to choose from the review for Curled Up With a Good Book, this was one of the ones that interested me. It was one of three spy-related novels I decided to try in recent months, each one of them being very different from the other. There was Daniel Silva's The Messenger, which is probably more typical of an espionage novel, followed by Ward Just's novel, Forgetfulness, which seemed to be more about grief and coming to terms with the tragic death of his wife at the hands of terrorists. The Echelon Vendetta was less of a spy novel and more of a thriller, the kind involving the hunt for a serial killer. In David Stone's novel, the serial killer is targetting CIA and contracted agents who had been involved in the Echelon assignment. CIA cleaner, Micah Dalton is assigned to the job.

I am unable to post my full review here because it has not yet been published on the Curled Up With a Good Book website (curledup.com). That probably won't be until closer to the release date of the book in February. I will post a link to the review once it is up for those interested.
I will say that I enjoyed the book, although I admit that I wasn't quite sure I would at first. It proved to be an entertaining story that kept me engrossed until the very last page.

Favorite Part: This may sound odd, but my favorite part of the book is actually the part that had me doubting I would like it at first. Having completed the book, I am impressed by the author’s ability to put me right into the main character’s hallucinations and delusions. While I suspected that what was happening was a drug or alcohol reaction of some sort, it still left me feeling a bit dazed and hazy, which I’m sure was just how Micah Dalton was feeling when it was happening to him.

I liked several of the characters in the novel. I was not too sure of the main character, Micah, at first, but the more I got to know him, the more I really liked him. Another of my favorites was the Italian Intelligence Officer Brancati. I was impressed most by how sharp he was and the way commanded respect. And then there was Fremont whose plea for Irene cemented my affection for the character.

Miscellaneous: Christmas is just a couple of days away. I love this time of year. I have been driving my husband crazy with Christmas carols, and probably my coworkers yesterday too. They are a great bunch though and tolerate me fairly well.

The wind is howling and bending trees. Tumbleweed and other assorted items are sailing by the house on air. It must be winter. I'll need to start watching what I touch. I collect static on days like this and what a shock that can be!
Posted by Literary Feline at 12/23/2006 08:27:00 AM