Review of Eragon by Christopher Paolini 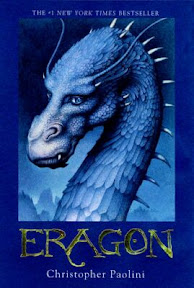 First Sentence: Wind howled through the night, carrying a scent that would change the world.

Reason for Reading: When Eragon first hit bookstores and the online discussions more often than not sang the praises of this young writer’s epic fantasy novel, I had to get in on it. With so much else to read around me, it’s taken me a while to get to it, but with the movie being released this month, I didn’t want to put reading Eragon off any longer.

Synopsis from Amazon.com: Eragon, a young farm boy, finds a marvelous blue stone in a mystical mountain place. Before he can trade it for food to get his family through the hard winter, it hatches a beautiful sapphire-blue dragon, a race thought to be extinct. Eragon bonds with the dragon, and when his family is killed by the marauding Ra'zac, he discovers that he is the last of the Dragon Riders, fated to play a decisive part in the coming war between the human but hidden Varden, dwarves, elves, the diabolical Shades and their Neanderthal Urgalls, all pitted against and allied with each other and the evil King Galbatorix. Eragon and his dragon Saphira set out to find their role, growing in magic power and understanding of the complex political situation as they endure perilous travels and sudden battles, dire wounds, capture and escape.

Comments: It never fails that when I lose myself in a fantasy novel like this one, I wonder why I don’t read more of this genre. I love being swept up into another world, meeting mythical and fantastical people and creatures not found on this earth. Fantasy is the ultimate flight for the imagination for it takes a reader outside of what is known and familiar and into a time and place that is neither here nor now. I don’t mean urban or paranormal fantasy, which plays on the world as we know it, distorting our reality. I am talking about the more traditional quest-type fantasy (like Tolkien, for example), the stories about magic, dragons, elves, dwarves, epic sagas of those types. Although I do like the other too.

Eragon is the first book in the Inheritance Trilogy. The author was a teenager when he wrote and first published the novel, which proved to be a good marketing strategy for the publisher as many readers scrambled to see just how good this kid was. Perhaps that is part of what made me hesitate so long before pulling Eragon off my shelf. I could not help but stop and wonder if the book was good or if it was just because of who the author was. I am not naturally drawn to young adult novels, and after having been disappointed by the popular Inkheart, by Cornelia Funke, I was a little gun shy. Lemony Snicket’s series was cute but repetitive and so obviously geared toward a younger crowd. J.K. Rowling with her Harry Potter series, at that point, seemed to be a fluke. Maybe her series would be the only young adult novels I would find worth my time to read. While one book does not make a trilogy, Eragon is a promising start, and Christopher Paolini has my attention. It is no wonder the book has a readership of all ages.

The story is inspiring and the characters interesting. While Eragon was slow at times, the story moved forward at a rapid rate. The novel holds the hallmarks of many traditional fantasy novels; it’s a coming of age story about your average farm boy whose talents and destiny are unknown until that fateful day when his life is irreversibly changed and he must chose his path. Suddenly he finds himself a hero, or on the road to being one at least, and it’s a fight between good and evil. While typical in that way, the fun is in getting to know the characters, caring about them, seeing them grow both in success and failure, and living their adventures with them.

Favorite Part: Is it fair to say everything? Probably not, but Eragon was a fun book to read. I enjoyed sailing through the skies with Saphira and Eragon, lessons with Brom, traversing the Hadarac Desert, and walking the halls of Tronjheim. I guess if I had to pick a favorite part it would be the scenes with Angela and Solembum. Or maybe Arya with her grace and swiftness. But then there’s the magic, which always draws me in.

Miscellaneous: I have read mixed reviews about the second book in the trilogy, and a part of me wonders if the criticism has anything to do with the fact that The Eldest is the middle book, which means it’s the bridge between the first and final book. I am not sure I am ready to jump back into Eragon’s world just quite yet.