Review of The Delilah Complex by M.J. Rose 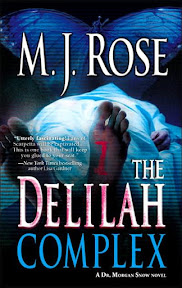 Reason for Reading: Another forward movement towards my goal to catch up with my series reading.

From the Publisher: As one of New York's top sex therapists, Dr. Morgan Snow sees everything from the abused to the depraved. The Butterfield Institute is the sanctuary where she tries to heal these battered souls.

The Scarlet Society is a secret club of twelve powerful and sexually adventurous women. But when a photograph of the body of one of the men they're recruited to dominate--strapped to a gurney, the number 1 inked on the sole of his foot-- is sent to the New York Times, they are shocked and frightened. Unable to cope with the tragedy, the women turn to Dr. Morgan Snow. But what starts out as grief counseling quickly becomes a murder investigation, with any one of the twelve women a potential suspect.

The case leads Detective Noah Jordain -- a man with whom Morgan has shared a brief, intense connection--to her office. He fears the number on the man's foot hints that the killings have just begun. With her hands tied by her professional duty, Morgan is dangerously close to the demons in her own mind-- and the flesh-and-blood killer.

Comments: Trouble seems to come to Dr. Morgan Snow in M.J. Rose’s second novel starring the well-respected sex therapist. I enjoyed the first book in the series, The Halo Effect. A sex therapist certainly is an interesting choice for a protagonist, and I was curious to see where author M.J. Rose would go with the next novel in the series.

Morgan is good at what she does, but her insecurities on the home front sometimes get the better of her. She’s a divorced mother trying to raise a soon-to-be teenage daughter, struggling to be supportive of her daughter’s choices, although not quite agreeing with them. Meanwhile, she is fighting her attraction to the lead investigator, Noah Jordain, who is quite the catch. All of this seemed to play a big part in the novel. Amidst all that, Morgan cannot help but be curious about the connection between her new clients and the disappearances of several of their male associates. In The Delilah Complex, Morgan does not really take any sort of lead in the investigation; she just sort of stumbles on certain aspects that help lead to the conclusion. It was an interesting approach that did not deter from my enjoyment of the novel.

As an aside, I did pretty much figure out how it would all turn out early on in the book, however, I think M.J. Rose did a good job trying to obfuscate what was to come.