Review of The Death Collectors by Jack Kerley 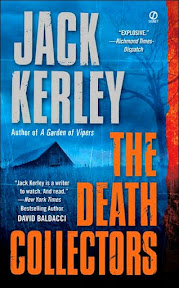 Reason for Reading: I wanted to knock off another of my series book, and this one sounded like a good one to read. I had enjoyed the first book in Kerley’s series, The Hundredth Man, and had decided it was a series I wanted to follow-up on.

From the Publisher: In 1972, on the day of his sentencing, renowned artist and serial killer Marden Hexcamp is shot dead in the courtroom. Members of his Mansonesque band of followers are imprisoned or simply disappear.

Fast-forward more than thirty years: A suspected prostitute is found murdered in a candlelit motel room, the first in a series of horrors suggesting Hexcamp's art remains alive and treacherous. Following a trail of beautiful - and profoundly disturbing - artwork, homicide detectives Carson Ryder and Harry Nautilus descend into the shocking world of the Death Collectors, people who spend vast sums to collect serial-killer memorabilia. As Ryder and Nautilus race to solve a thirty-year conspiracy, it becomes sadly evident that at the intersection of art and madness, death is beauty, tragedy a memento, and suffering suitable for framing.

Comments: I had not expected to read this book in just over a day. While I enjoyed The Hundredth Man and saw it as a promising start to a new mystery series, I was even more impressed with Jack Kerley’s The Death Collectors. I was swept away in the story, which was entertaining, at times morbid, and always interesting.

Carson Ryder by himself would probably get on my nerves after awhile, but the addition of his faithful partner, Harry Nautilis, who deserves a starring credit all his own, takes off the edge of Carson’s personality, which borders on arrogant and reckless at times. They make a great team. There was a lot less bureaucratic politics in this novel than in the last, with the plot line staying close the mystery itself. The mystery builds on itself throughout the book, taking the story into unexpected directions, becoming more and more involved as it went. Readers are taken a little bit deeper into Carson’s past as his brother, Jeremy, is pulled into the investigation for help, adding that extra personal touch. Readers also get a taste of the morbid world "death collectors," a world I gladly am not a part of.

After finishing The Death Collectors, it is taking a lot of energy out of me not to rush out and pick up a copy of the latest Jack Kerley novel, which is out in hardback at the moment.

Favorite Part: I wasn’t too keen on DeeDee Dansbury at first, but she grew on me after awhile. Harry Nautilus is probably my favorite character in the series. He’s got a good head on his shoulders and keeps Carson Ryder in check. I wish he could have played a bigger part in the novel this time around.
Posted by Literary Feline at 12/12/2006 08:40:00 PM