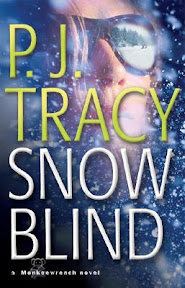 First Sentence: The had to sit for a time after dragging the body far in this heat—two young women in sleeveless summer dresses, hugging their knees on the hillside while the hot wind danced in their hair and crept up their skirts and a dead man lay behind them.

Reason for Reading: Snow Blind is the 4th book in the Monkeewrench series. I’ve enjoyed all the previous books and decided it was time to read the most recent book in the series.

Comments: The mother and daughter writing team that write under the pseudonym P.J. Tracy has yet again written a suspenseful and entertaining novel. In their latest novel, the Minneapolis police have their work cut out for them when they discover the bodies of two police officers in snowmen during a city wide snowman-building contest. Detectives Gino Rolseth and Leo Magozzi are on the case as the winter weather turns fierce and their investigation takes them in unexpected directions.

In Dundas County, a third body is discovered in a snowman, and the Minneapolis homicide detectives join forces with the newly elected and highly inexperienced Sheriff Iris Rikker and her team to determine if there is a link between the murders or if it is just a copy cat killing. The Monkeewrench crew makes several appearances as they offer their computer skills and services to help in the investigation, hoping to catch the killer before he or she can strike again.

Although the novel got off to a slow start, weighed down by descriptions of the weather conditions which soon became an integral part of the story, Snow Blind eventually took off and kept me glued to the pages, wanting to know what would happen next. Just as in Live Bait, the authors’ second novel, where the character focus was more on the Minneapolis homicide detectives rather than the Monkeewrench crew, I also found Snow Blind to be similar in theme as Live Bait. Nothing is ever just black and white, and that comes out clearly in Snow Blind as the reason behind the crime becomes more apparent.

Favorite Part: I love spending time with Leo and Gino, and this time was no different.

Miscellaneous: Labor Day Weekend is finally here. It's the beginning of my favorite time of year.
Posted by Literary Feline at 9/03/2006 10:12:00 PM