Review of The Devil's Feather by Minette Walters 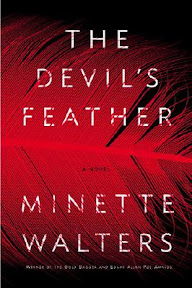 First Sentence: I don’t know if that story was picked up in the West.

Reason for Reading: I was selected to review this book for the publisher through the Borzoi Reader program.

Comments: Minette Walters is one of many authors that have been recommended to me over the years; however, before now, I had yet to give her a try. I am kicking myself for my reluctance and am extremely grateful to Knopf for giving me the opportunity to give read one of her novels. The Devil’s Feather will not be my last Minette Walters’ book if I have any say in the matter.

Reuters war correspondent Connie Burns, believes a British mercenary is behind the brutal rapes and murders of five women in Sierra Leone, despite the confessions of three teenagers. Her suspicions are aroused even more when she catches a glimpse of the mercenary in war torn Baghdad, and she begins to investigate his past, looking for patterns of crimes that might tie him to the murders. Realizing she may be in danger the more she digs into the life of the killer, Connie decides to seek safety in England, only to be kidnapped before she reaches the airport.

Connie turns inward after her release, not wanting to share with anyone the horrors and torment she went through in captivity. She finds refuge in a small countryside home where she befriends a recluse, Jess Derbyshire, whose history and suffering are not too dissimilar from her own. As Connie struggles to come to terms with her own fears, her curiosity of her landlady’s past as well as that of her new friend grows. Although two seemingly unrelated stories, it is the characters that bring them together seamlessly, as their stories unfold.

The Devil’s Feather is a complex tale of learning to cope and overcome fear just as much as it is a riveting thriller. The novel was well written and the depth of the characters only served to enhance the story. Minette Walters’ characterization of Connie Burns and the shame, intense fear, and anguish she felt at having been victimized was spot on. The format of the novel, narrative mixed in with e-mails, the main character’s notes and the opening news articles, offered a great way for the story to progress and for the author to step outside the first person narrative of Connie to allow for outside insight into the main character and events as they unfolded. I will definitely be reading more by this author.

Favorite Part: I felt an immediate connection with Connie’s character, and Jess was probably my most favorite of all. My favorite scene was probably when Connie and Jess first meet, with the mastiffs there to greet Connie. It was a very revealing moment for both characters.

Miscellaneous: Labor Day Weekend is over and it’s back to work tomorrow. Although I am not looking forward to having to get up early now that I’m on the day shift, I am very much looking forward to getting off work at a decent hour!
Posted by Literary Feline at 9/04/2006 07:28:00 PM