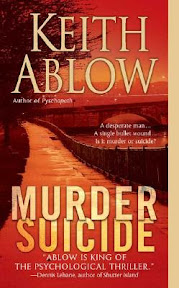 First Sentence: The shadow of the night still clung to a frosty Boston morning, the silence broken only by the crisp, clean sounds of the slide on a Glock handgun being pulled back, a 9mm slug popping up out of the magazine, clucking into the chamber.

Reason for Reading: I decided to continue with the Frank Clevenger series since the books I was set to review had not yet arrived in the mail when I was ready to start a new book.

From the Publisher: An hour before inventor John Snow is to undergo experimental brain surgery, he's discovered outside Massachusetts General Hospital, dead from a single bullet wound. Did he commit suicide, as the police suspect-or was he murdered?

Forensic psychiatrist Frank Clevenger is about to find out. As he digs into Snow's complex past, he discovers a host of tortured relationships: The wife who can never forgive what Snow has done to their child and their marriage. The son who loathes him. The beautiful mistress who loves him deeply but can never have him. The business partner intent on taking control of his inventions.Whatever secret Snow took to his grave, it is casting a shadow of suspicion over the people who said they loved him. Now Clevenger must venture into a dead man's dark past to unearth the truth-in an explosive mystery of passion and betrayal.

Comments: Perhaps I should not have continued with the series without taking a break first. Psychopath was such an entertaining reading experience. From the very description of Murder Suicide, I had my doubts that the book could live up to its predecessor in my eyes. The main plot line didn’t really catch my fancy. While my opinion of Frank Clevenger continues to rise, I was disappointed with this novel in general. I was unable to take to most of the characters and found the story farfetched at times.

Favorite Part: Billy’s story thread was my favorite part of the book. Perhaps the only redeeming story. Frank and Billy continue to grow as characters, both as individuals and in their relationship with one another.

Miscellaneous: Three review books arrived in the mail on my birthday no less and so I’ll be busy with those for awhile. Now the question is where to start?
Posted by Literary Feline at 9/13/2006 07:11:00 PM