Review of Scenes From the Blanket by Ted Torres 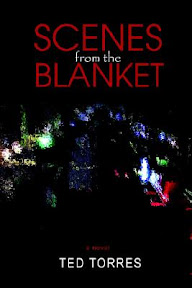 First Sentence: The Reverend Awoke with a jolt.

Reason for Reading: I reviewed this book for Front Street Reviews.

Comments: There is a comfort and peace that comes under the cover of nightfall, as well as a freedom to let down one’s pretensions and explore the many mysteries the darkness has to offer. Ted Torres’ novel, Scenes From the Blanket, offers a glimpse into the nightlife of New Orleans, the magic, glamour, and temptation of drugs and sex. It is the perfect setting for this original novel. Ted Torres’ descriptions of the French Quarter brings the setting to life; New Orleans is a character all in it’s own.

In what would become a nightmare for many, Reverend Wakefield, once a man of God, places a curse on the city of New Orleans, striking out at those who would embrace the night. Over the years, the disappearance of several individuals remains a mystery, as does the nature of the curse. The time line in Scenes From the Blanket is fluid, moving in time between 1937, writer Blake Worthington’s exploration of New Orleans and the approach of a new millennium. The two more modern time lines were confusing to follow at first because they lacked more clear delineation.

Arriving in the city in hopes of recapturing a relationship he once shared with an old flame, Blake unexpectedly finds himself linked to the fate of the city in a way he never anticipated. He immediately falls in love with New Orleans and the allure of the night, the time of day in which he has always taken comfort. Judith Blair opens her life back up to Blake, hoping, too, that they can rekindle their love. However, she soon discovers that the life she has grown content with, a successful career and a conventional lifestyle, clashes with Blake’s choice for a more hedonistic existence, in which self-discovery and going after one’s desires with little concern for tradition and convention take precedence. Rallying those of like mind around him, Blake brings together The Order of the Blanket, and together they open their hearts and souls to the power and love of the night, reveling under the cover of darkness. The Order of the Blanket is reminiscent of a 1960’s hippie commune, with a touch of the bohemian influence.

Upon his first night in the city, Blake is haunted by shadows. He is certain he is being stalked. Blake and Judith learn the truth about the curse and something of the shadows that chase them and threaten the Order of the Blanket through an old and mysterious man whose fate seems to be tied to Blake’s. Unless the curse is broken, it is only a matter of time before the shadows of the night reach out for them all.

The author uses words to paint a colorful and yet dark tale that pushes the boundaries of convention. The practical and grounded Judith was the most detailed of the characters, and perhaps the character to whom I was most drawn. Her counterpart, Blake Worthington, somehow remained elusive and a mystery, much like the portrait of the night Ted Torres painted in his novel. . I really didn’t see what anyone saw in Blake other than his good looks. He came across as selfish and egotistical. Then there is the mysterious Funnyman whose story was just about the only one that was worth uncovering with each turn of the page. Scenes From the Blanket is a novel that will reward the careful reader to some extent but overall was boring and the author took to long to get to the meat of the story.

Favorite Part: The scene where Funnyman tells Blake the history behind the curse. I felt like the story was actually getting somewhere at that point.

Miscellaneous: The changes at work seem to be coming in droves now. It’s not all that unusual, but there’s always a little anxiety to be had when those changes may impact me. As I told my boss, just let me know with enough of a warning so that I can make sure I know what time to be at work the next day!
Posted by Literary Feline at 9/30/2006 07:35:00 PM