Review of Compulsion by Keith Ablow 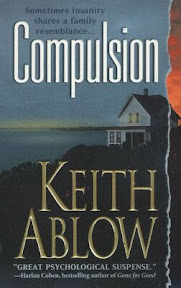 Reason for Reading: I figured I would continue on with the series while I’m immersed in Frank Clevenger’s world.

From the Publisher: Burdened by his own psychological scars, brilliant forensic psychiatrist, Dr. Frank Clevenger, has weathered the most extreme twists of the human mind. Then he receives a disturbing call from Nantucket's Chief of Police. The five-month-old daughter of prominent billionaire, Darwin Bishop, has been found murdered in her crib.

The obvious suspect is Darwin's adopted sociopathic son, Billy. Even Clevenger can't fathom the motive behind the troubled boy's murder of an infant. But what is Billy really running from? Does Darwin's stunning wife Julia know? If she does, she isn't talking. Neither is the Bishop's other son who's harboring terrible secrets of his own.

Falling for Julia is Clevenger's first mistake. Investigating the Bishops' twisted emotional landscape is his second. It's done more than just draw him into the maze of a [twisted] family history. It's trapped him. As his own demons rise to the surface, he must play the ultimate mind game to catch a killer-and make it out alive.

Comments: Just when I think I am beginning to respect and like Frank Clevenger, he does something that puts me back where we started. Talk about your flawed characters. I do like characters with flaws—it makes them more human and easier to relate to. However, there are certain flaws that I have trouble relating to for whatever reason. I think Frank Clevenger’s character would have a field day analyzing me and the reasons why I have trouble connecting with him the same way I would with other heroes in the books I read. And honestly, if I had to be analyzed by anyone in that way, Frank would probably be the psychiatrist I’d want to call. His skill and insight are unrivaled in the fictional world.

Keith Ablow has written another fast paced thrilling novel. Compulsion was even better than the first two novels, and I look forward to seeing what more trouble Frank can get himself into while trying to help those around him face their personal demons.

Favorite Part: Lilly’s story was my favorite part. I like reading about Frank putting his skills to good use, bringing out a person’s darkest secrets and helping them face them. There is another reason this particular story stands out for me—but to tell you might be too much of a spoiler even if the truth is revealed in the first chapter.

Miscellaneous: Keith Ablow is hosting a daytime TV talk show. Not sure how I feel about that. They all seem to run together after a while and this one seems no different.
Posted by Literary Feline at 9/07/2006 07:33:00 PM