Review of Psychopath by Keith Ablow 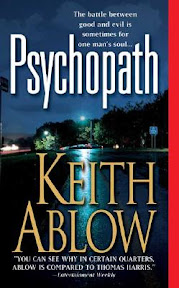 First Sentence: Mahler's Tenth Symphony played on the BMW X5's stereo, but even that serene music did nothing to calm Jonah.

Reason for Reading: Psychopath was the obvious next book to read in my plan to catch up in the Frank Clevenger series.

Comments: Written in third person instead of first like the previous books in the series, Psychopath stands apart from Dr. Ablow’s earlier books. The thriller opens as a disturbed psychiatrist sets the trap for his latest victim, which is sure to end in the death of his prey. Having settled into his life and the role of being a father to his adopted teenage son, Frank Clevenger is reluctant to get involved with the FBI’s search for the “Highway Killer” who is known to have killed twelve people in twelve different states. But when the serial killer reaches out to Frank, seemingly asking for his help, Frank cannot refuse. Frank can only hope that his skills as a forensic psychiatrist will prevent too many more deaths of innocent people.

In the usual Ablow fashion, Psychopath delves into the psyche of a mentally ill person, drawing him out and laying his life bare. The tie between childhood trauma and the destruction of oneself and those around him or her is once again explored, creating a riveting and exciting story that was next to impossible to put down. Frank’s character has clearly matured and is a much more likeable person in this latest novel. Psychopath is by far the best in the series that I’ve read so far.

Favorite Part: The third person voice worked very well for this particular novel, allowing the reader into the mind of the serial killer, which is always a fascinating viewpoint to look out at the world from, however sick it may be. It also allowed for some distance from the main character, which I appreciated.

Miscellaneous: My husband and I had the day off today, sort of an extended weekend to celebrate my birthday. We took in the movie Hollywoodland, which we both enjoyed, and followed that up with a tasty lunch at Islands. Hmmm. Got to love those Yaki tacos!
Posted by Literary Feline at 9/08/2006 07:20:00 PM