Review of Projection by Keith Ablow 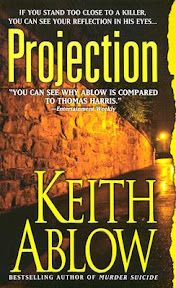 First Sentence: I watched Josiah King pace in front of the witness stand.

Reason for Reading: Getting back into my series reading, I felt Keith Ablow’s series was a good place to start. I read the author’s first book in the series quite a while ago and enjoyed it, deciding it was high time to read another.

From the Publisher: Once an accomplished plastic surgeon, Trevor Lucas started using his scalpel to do very bad things. Locked in a Boston psychiatric hospital, Lucas is holding the ward hostage-and performing grisly "operations" on his prisoners. Lucas, calling for forensic psychiatrist Frank Clevenger, is willing to strike a deal. What Lucas knows about Clevenger could ruin the psychiatrist. What Clevenger can find out about Lucas could save the hostages. And he's got 24 hours to do it. As Clevenger feverishly delves into Lucas' past, what he discovers is chilling, disturbing, and all too familiar. For Clevenger can't help but wonder if his proximity to killers and madmen in coincidence, or something much more complex: Projection.

Comments: Before reading the first novel of the Frank Clevenger series, I had been warned that the main character might be hard to like and at times difficult to empathize with (at least for me) because of his extracurricular activities. I took that warning to heart and was able to enjoy the novel, Denial, as a result. The same rules applied to Projection. Forensic psychiatrist Frank Clevenger lives by his own rules. His intelligence, skill at his job, and insight not only into others but also into himself make him an appealing leading man. I flew through this novel, having a hard time setting it down. At times I felt like I was reading a horror novel, which fortunately did not invade my dreams when I had to finally decide sleep before a working day was a necessity. One thing that especially impressed me about Ablow’s second book was the way he did not leave anything hanging from the first. I had been sorely disappointed at the ending in Denial, which didn’t sit well with me, and Projection offered me a more satisfying resolution. Although the plot to save the hostages and the hostage taker plays a large part in the novel, I think that the main character’s own self exploration into his past and his struggle with addiction take center stage.

Favorite Part: North Anderson is a character that stood out the most for me in this novel. He was a good character—kind of refreshing one compared to so many of the others in the book.

Miscellaneous: I know it’s lazy of me to rely on the publisher’s synopsis of the book, but I was just not feeling up to summarizing the book myself. Besides, the publisher did a much better job than I could have.
Posted by Literary Feline at 9/06/2006 07:31:00 PM