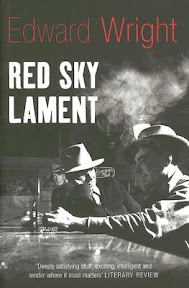 First Sentence: Spotted over late-night scrambled eggs and onions at Schwab’s Drugstore on the fabled Sunset Strip, none other than Clark Gable, one of our favorite leading men.

Reason for Reading: I had the opportunity to review this book for Front Street Reviews. Being a mystery lover, I thought it was worth a try.

Comments: Red is often a color associated with anger, passion, and represents fire as well as, at one time, communism. A lament is a cry of sorrow or grief. Red Sky Lament is a fitting title for a novel wrought with all of those characteristics.

During the late 1940's and into the 1950's, J. Parnell Thomas, chairman of the House Un-American Activities Committee opened an investigation into the Hollywood Motion Picture Industry, searching out people who were associated with the Communist Party or showed signs of communist sympathies. Hearings were held condemning Hollywood personalities, ruining their lives and careers with little regard for truth and justice. It was a witch-hunt of sorts, and unless a person subscribed to the popular beliefs at the time, that person could easily be labeled as a communist sympathizer and an outcast.

It is in this environment, with the looming danger of a brush fire that could change course with a shift in the winds and the unsettling threat of the upcoming hearings, that Edward Wright’s novel is set. When screenwriter Owen Bruder is accused of being a communist, Maggie O'Dare turns to her old lover, the former cowboy actor and ex-felon John Ray Horn. Despite his misgivings and doubts about the screenwriter, John Ray agrees to take on the case to uncover the identity of the person who lied about Owen Bruder's communist affiliation. As betrayal gives way to murder and the lives of his friends are threatened, John Ray's determination to get to the truth only grows stronger.

There could not be a more perfect main character for a novel like this. John Ray Horn is a man of his time, loyal, a cowboy who will stand up to his convictions and for those he loves, and a man of decent character. He isn't without his flaws, however. His temper and jealously sometimes get in his way. His lack of interest in politics allows a glimpse into just how uncertain things were during that time period, with the strong sense of patriotism but also a sense of fairness, which seemed to get lost in the fear of communism, however real or imagined.

Edward Wright has taken a piece of American history and made it his own in Red Sky Lament. The novel is well researched and captures the heart of the controversy, including the patriotism, the bigotry and the fear of the era. He adeptly weaves fact with fiction, bringing the story to life. The reader is transported to Los Angeles of the 1940's from the very first pages and the characters were well drawn. Red Sky Lament is a mystery novel worth reading whether you are new to the series or a continuing fan.

Favorite Part: The Woody Guthrie bits were fun. I really did like the main character, John Ray Horn; he seems like someone I would want on my side in any sort of fight. He’s loyal, if sometimes misguided at times, but overall wants to do the right thing. Maggie O’Dare is probably my favorite character though. She’s gutsy and intelligent.
Posted by Literary Feline at 10/11/2006 08:39:00 PM