Review of The Thoughtful Spot by Eric R. Weule 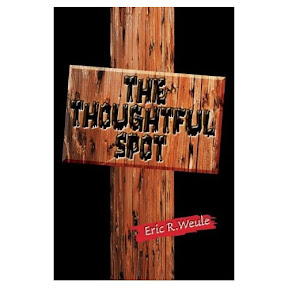 First Sentence: The grass felt cool on her legs as she kneeled.

Reason for Reading: I selected this book to read and review for Curled Up With a Good Book.

Comments: With The Thoughtful Spot, author Eric R. Weule has written a novel that is much more than it seems at first glance. His gentle writing style pulls the reader right in and with each new facet that is added, the story grows more and more intricate. The author does not waste words by weighing it down with heavy pose or description.

In the opening scene, Stacey Hughes is celebrating what would have been her son’s 8th birthday. Stacey has suffered the worst tragedy a mother can suffer and her once happy life is in ruins. At one time she had the perfect marriage and a remarkable son named Micah. Nothing could have been better until that fateful day when everything would change. The tragedy put the Hughes’ lives into a tailspin and they stopped living life, merely existing. Stacey is ready to begin her life again but finds it difficult. Her marriage is in shambles. She is grateful for her teaching position at the local community college, which offers her some normalcy.

Tyler Sparks once lead a seemingly satisfying life. He settled in Seattle, working as a landscaper and doing other odd jobs, a transplant from Southern California. While at first reluctant to accept that his life was not what it once was, Tyler comes to the realization that he can no longer ignore the direction his life is going. He has been suffering from memory lapses, seizures, sensory overload, and blindness and worries that he is either going insane or perhaps has an undiagnosed medical condition. It feels as if there is something or someone that is taking refuge in his skull. His life is unraveling before his very eyes. The final straw is when his wife betrays him with his best friend. Tyler struggles to get back on his feet while searching for the cause of his loss of time and memory. Tyler’s brother and sister-in-law offer him shelter in their Orange County home and strength during his time of need.

Stacey and Tyler’s stories run parallel to each other, finally converging in a powerful way. The two are connected in a way neither imagined. They come together in the hopes of understanding the direction their lives have taken.

Both Tyler and Stacey are two characters who are working through their grief. They are both strong people who want to move on with their lives and share a determination to do so. They are well-drawn characters whose emotions and thoughts are deftly expressed throughout the novel. There is an immediate empathy for each of the main characters as well as many of the other major ones, including Micah and Jake whose own stories are intricately weaved into the story.

The Thoughtful Spot is an insightful and at times emotionally charged novel about family, love, grief and resilience. It is reminiscent of the Alice Sebold’s heart-wrenching novel, The Lovely Bones. Eric R. Weule’s novel is impossible to put down, and I was kept guessing right up to the very end. The Thoughtful Spot is a touching novel that will pull at the reader’s heartstrings and keep the reader entranced until the very end. Originally published on Curled Up With A Good Book at www.curledup.com. © Wendy Runyon, 2006

Favorite Part: My favorite part of the book are the glimpses of Micah that the author gives readers. Micah seemed like an extraordinary boy. I also liked the scenes with Jake. Jake was a likeable character overall.

Miscellaneous: I read a review that likened the author’s novel to Stephen King and Dean Koontz, which just confuses me. I don’t see the similarities. King and Koontz are writers whose novels terrorize and create fear (in a good way, of course), while The Thoughtful Spot is a novel that inspires and whose purpose seems more comforting. Maybe that’s just me.
Posted by Literary Feline at 10/26/2006 05:24:00 PM