Review of The Devil of Nanking by Mo Hayder 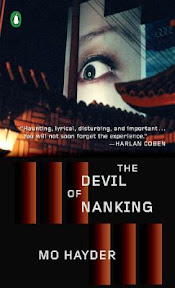 First Sentence: To those who fight and rage against superstition, I say only this: why?

Reason for Reading: I selected to review The Devil of Nanking for curledup.com. The book sounded interesting and a couple of fellow booklovers from one of my book groups mentioned what a great thriller writer Mo Hayder is. I knew I had to give her a try.

Comments: I am finding that I really enjoy thrillers that have substance to them, the way this novel did and Minette Walters’ The Devil’s Feathers. Both were about more than just the story, delving deeply into the character development and their own self-discovery.

In The Devil of Nanking, Mo Hayder has taken a historical event that was suppressed for many years and that only recently has been brought to the forefront. Although the details and numbers of the Chinese civilians murdered by the Japanese soldiers during the Massacre of Nanking are still debated, it is no longer a secret lost in denial. Weaving fiction with fact, Mo Hayder has created a compelling and at times intense novel that was next to impossible to put down.

Shi Chongming kept his family from fleeing Nanking, China when word first got out that there was a possibility that the Japanese would march into the city. The year was 1937. He held out hope that his leader would see them through until it was too late. He witnessed the destruction of his city and the people in what would become known as the Massacre of Nanking. Decades later, Shi Chongming is a professor of sociology at Japan’s Todai University in Tokyo, where he teaches and lives a relatively quiet life, the past of Nanking seemingly buried.

One summer day a young British woman who calls herself Grey appears on Chongming’s doorstep at the university. She wants only one thing from him: to see the film footage he’s protected for so many years of a singular event during the Nanking Massacre of 1937 that has haunted her for “nine years, seven months, and eighteen days.” She searched long and hard for evidence that the event had occurred, despite those around her calling her crazy and of having an overactive imagination. Proving if only to herself that one sentence she read in an orange book she had found in her mother’s house all those years ago was true, has become her life’s mission.

Tokyo is not what Grey expected. The city is much more modern and built up than she anticipated. Her expectation was to find a city that still showed signs of being war torn after the Second World War. In a culture that is believed to be of one mind, where conformity is key, she also was able to see an unexpected individualism in the people. Grey takes a room in a mansion, her landlord an American to whom she finds herself drawn despite the warnings of their Russian roommates. She finds a job as a hostess in a sophisticated club where she entertains and caters to well to do men. Grey, having grown up completely isolated and never truly believing in herself, suddenly finds a confidence she never knew she had.

It is at the club that Grey meets Junzo Fuyuki, a crippled gangster, one of the most feared men in Tokyo. Chongming takes an interest in Grey once he learns of her connection to Fuyuki and they agree to a trade, Chongming will show Grey the film she has spent years trying to find, if she does him one small favor.

Chongming and Grey are much alike, their paths very similar. They both struggle with guilt from the past and the parts they played in the tragedies that haunt them. Furthermore, the two have built walls around themselves, remaining withdrawn and not letting anyone in so easily.

With Grey’s present day narrative and excerpts from Chongming’s journal from the time of the massacre running parallel to each other, a very disturbing and intriguing story emerges in The Devil of Nanking. The two stories deftly come together into a haunting and powerful tale that the reader won’t soon forget. Mo Hayder’s characters are complex and have many layers. As the story unfolds, each layer is peeled away revealing deeper, often unexpected layers. The author can be harsh and raw in her descriptions, which only add to the intensity of the novel.

The Devil of Nanking is not a novel for the faint of heart. Mo Hayder was not afraid to put down on paper the grim realities of the atrocities committed during wartime. She takes readers deep into China during a very dark moment in history as well as flirts with the deadliest of the Tokyo gangsters. The Devil of Nanking is definitely worth taking the time to read. Originally published on Curled Up With A Good Book at www.curledup.com. © Wendy Runyon, 2006

Favorite Part: My favorite character was Mama Strawberry, who liked to dress up like Marilyn Monroe each night. I think her story is one worth pursuing if ever a person were caught up in Mo Hayder’s fictional world.
Posted by Literary Feline at 10/14/2006 05:21:00 PM