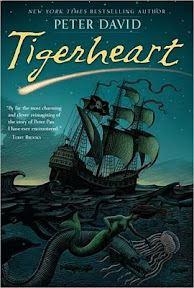 Young Paul Dear stared at his reflection one evening for a very long time. When his reflection began talking back to him, Paul began to think that perhaps he himself was actually The Boy of Legend. [1st paragraph]


One of the houses my family lived in while I was growing up had a living room (as opposed to the family room) that was free of furniture except for a chair and several bookcases. It served as a playroom for my brother and I. I would often set up cities and neighborhoods for my paper dolls and barbies or my brother's cars (which I loved to play with too). Other times my brother and I would build our own boats and pretend the red carpet was the raging sea. We went on adventure after adventure.

And so it was with those memories in mind that I entered the Anyplace, a world where imagination and belief in a bit of magic are more than just pretend play. When I first heard about Peter David's Tigerheart a couple of years ago, I was excited about reading it. Somehow though I never managed to get to it. Until now. I confess my enthusiasm had waned some and upon reading the synopsis on the back cover, I wasn't sure I was really interested in reading it anymore. The story itself sounded interesting, but the idea of reading a book that is sort of a spin off of another (the author refers to it as a pastiche), more famous story was off putting. Still, I figured I'd at least give it a try and see how far I could get.

I was pulled in from the very first and never looked back from there. This is one of those books that is aimed for all ages. As I read, I could see myself sharing the story with my daughter while at the same time, the novel is written in such a way that appealed to me as an adult as well.

I doubt there are many people out there who have not heard of J.M. Barrie's Peter Pan. His story is legendary. Peter Pan is the boy who never grew up. His adventures with Wendy and her brothers are known all over the world. I have never read Barrie's book although I have seen various versions of the story in movie form. Author Peter David's love for the story of Peter Pan began in his childhood and extended into his adulthood. He loved J.M. Barrie's story and decided to continue it in his own way, while at the same time paying homage to the original.

Although the familiar famous names are different in Tigerheart, there is no doubting which character represents the original ones. Captain Hook has become Captain Hack; Gweeny used to be Wendy; Tinkerbell is now Fiddlefix; and Peter Pan has become simply The Boy. The hero of the novel, however, and who the story really is about is Paul Dear.

Paul grew up on stories about the Anyplace and The Boy. His father encouraged him to believe while his mother would rather he grow up and forget all that nonsense. Everything in Paul's experience tells him the stories are true--for he has seen The Boy with his very own eyes. He has spent time with the pixies. When tragedy strikes his family, his world is turned upside down. His mother is severely unhappy and Paul is determined to do what he can to make her happy again. With the help of the pixie Fiddlefix, Paul flies off to the Anyplace one night, much to the chagrin of his mother.

What follows is an assortment of quests and adventures. There are pirates and sirens, a great white tiger, the Piccas, the Bully Boys, shadows, and, of course, The Boy. It a wonderfully fun story, full of humor and hijinks. The novel also has its serious side, however, centering around the themes of growing up and of loss, among other things.

In many respects I thought of Paul and The Boy as being two sides of one coin, both so much alike and yet very different. They both love adventure and are brave and imaginative. The Boy and Paul have very different philosophies about growing up. Paul knows it is inevitable and accepts it, even welcomes it. The Boy, on the other hand, wants nothing to do with growing up. He wants to hold onto the magic of childhood forever. He'd been betrayed by an adult and sees adults as the cause of all the world's ills.

The adult in me raised an eyebrow at how the novel came to an end, but the child in me was quite delighted. Still, it seemed fitting for the type of tale it was. Peter David mentioned in an interview that he wrote Tigerheart using a similar voice as the one J.M. Barrie used in his story about Peter Pan, and I'd be curious to know if he succeeded. I haven't read Peter Pan, but now wish I had. It'd be interesting to read the two books back to back. Maybe one day I will.


You can learn more about Peter David and his books on the author's website.