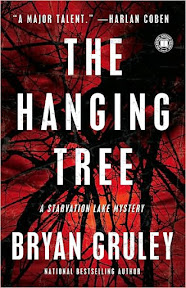 I have learned that you can be too grateful for love. [1st sentence]

Gus Carpenter is a small town journalist. He had once been on his way to winning a Pulitzer Prize for his reporting but bad choices led to his downfall. He returned home with his tail between his legs. The Hanging Tree picks up where Starvation Lake left off; Gus isn't the most well liked person in town, his digging for the truth often coming into conflict with the town's plans expand and boost the sunken economy.

Starvation Lake is a hockey-crazed town. Gus himself plays hockey in an area league. He wants a new rink as much as anyone. However, he upsets a lot of people by reporting on the financial woes of the financier of the proposed new hockey rink. Even his employers are up in arms and do what they can to try and prevent Gus from causing any more ruckus than he already has. If that isn't bad enough, matters are complicated for Gus when his second cousin, Gracie, is found dead, hanging from a tree. Her death in all appearances is a suicide, but something about it doesn't sit well with Gus or Darlene, Gracie's best friend and a local sheriff deputy. Gus begins to doubt Gracie's death was a suicide.

The more he digs into both his cousin's death and the wealthy financier of the rink, the more secrets he uncovers, and those secrets involve some very powerful people. Gus will risk his job and possibly his life to get to the truth.

Like Starvation Lake, The Hanging Tree is a character-driven novel. The author takes his time weaving together the intricate stories of his characters as well as the main plot point. While this book would stand very well on its own (the author does a good job of bringing the reader up to date without revealing the plot in the first book), I am glad I had the background provided in Starvation Lake when beginning this one. Knowing the characters' histories in more detail only enhanced my enjoyment of The Hanging Tree.

Gus has grown since the first novel and yet he still grapples with the mistakes he has made in the past. He has a lot on his plate. His girlfriend's estranged husband reappears and only adds to his personal problems. His relationship with his now deceased cousin had been strained at best and he is beginning to realize just how little he truly knew her. And Gus' mother is struggling with bouts of memory loss, her own health deteriorating. His work helps keep him focused and often leads him to truths about himself and those close to him that he might not have known otherwise.

Bryan Gruley adeptly addresses the changing scene of the newspaper business in the United States, giving readers a first hand look at the waning interesting in paper sales and the growing interest in online media resources. I confess I'm one of those people who long ago stopped subscribing to the actual newspaper but do subscribe to several online news sources. It's fast and convenient--not to mention cleaner (no black ink to wash off), trends our society values more and more.

The Hanging Tree is a great sequel to Starvation Lake and I look forward to seeing what the author has in store for his readers next.