Review: The Man Who Loved Books Too Much by Allison Hoover Bartlett 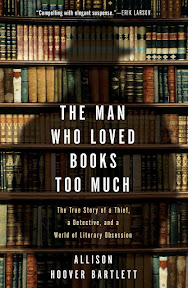 At one end of my desk sits a nearly four-hundred-year-old book cloaked in a tan linen sack and a good deal of mystery. My friend Malcolm came across the book while carrying out the sad task of sorting through his brother's belongings after he committed suicide. On the sack was a handwritten note that began, "To whom it may concern," and went on to explain that several years earlier, a friend had withdrawn the book from a college library where she worked and had accidentally taken it with her when she moved away. He wrote that she wanted the book to be returned to the library anonymously, but that he hadn't had time to do so. Gingerly Malcolm lifted the large, heavy tome with gleaming brass clasps from its sack. "Isn't it beautiful?" he said as he handed it to me. My first thought was: Yes, beautiful. My second: It's stolen. [excerpt from opening paragraph]

The Man Who Loved Books Too Much: The True Story of a Thief, a Detective, and a World of Literary Obsession by Allison Hoover Bartlett
Riverhead Books, 2009
Nonfiction; 274 pgs

Allison Hoover Bartlett, a book lover in her own right, came across a 400 year old book whose province was a bit of a mystery. Her curiosity was immediately piqued and she began to investigate where the book came from. Her interest in the rare book took her to an unexpected place, and she was soon caught up in a story about a book thief and the man who was determined to catch him. From the moment I first heard about this book, I knew I had to read it.

John Charles Gilkey not only loves books, but he longs for a collection of his own, one that he believes will inspire respect. Despite his not having the means to afford such a collection, he goes about finding a way to build his own collection anyway. He steals from rare book dealers and sellers through any means necessary, including by fraud and credit card theft.

Ken Sanders, a book dealer and collector, takes on the task of organizing a way to track stolen books among others in the rare book trade, and it is through him that a pattern emerges and Gilkey finally is caught. The author spends time with both Sanders and Gilkey in an effort to learn more about the rare book trade and the motivations behind book collecting at the height of its passion.

The author writes: "As collectors have often remarked, collecting is like hunger, and having one more books doesn't quench the longing for another." Ah, how well I know that feeling! My own book collection wouldn't merit a glance by the collectors and dealers mentioned in Bartlett's novel. My interest in books is purely for the story rather than it's worth, value and rarity. Still, I have known that hunger all too well upon visiting a bookstore or book fair. Hence why my TBR collection has gotten so far out of control.

I found it most interesting to get a glimpse of Gilkey's reasoning and rationalization for committing the crimes he did. It was scary in some ways: his lack of regard for those he stole from and his feeling of entitlement. As charming as Gilkey seemed to be, I found him rather arrogant and unlikeable. Perhaps my recent experience with thievery plays a part in that? Though I'm not so sure I would feel any differently otherwise.

My heart did go out to the victims of his crimes, and I can imagine how frustrated they must be that book theft isn't taken more seriously. One particular scene in the novel that had me holding my breath was when Gilkey and the author visited one of the rare bookstores Gilkey had stolen from. The tension coming from the pages was palatable.

Allison Hoover Barlett presents her research in a very approachable way. Whether you are a true crime aficionado or a book lover, this is a must read book. Amidst Gilkey and Sanders story is a bit of history about other book thieves and collectors as well as tidbits about the rare book trade. It is a fascinating world.

You can learn more about Allison Hoover Bartlett and her book on the author's website.