Review: The Devotion of Suspect X by Keigo Higashino 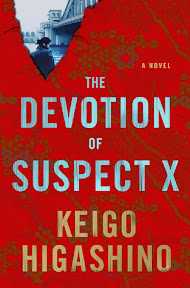 At 7:35 A.M. Ishigami left his apartment as he did ever yweekeday morning. Just before stepping out onto the street, he glanced at the mostly full bicycle lot, noting the absence of the green bicycle. [opening to The Devotion of Suspect X]

Yasuko Hanaoka is a divorced, single mother who thought she had finally escaped her abusive ex-husband Togashi. When he shows up one day to extort money from her, threatening both her and her teenaged daughter Misato, the situation quickly escalates into violence and Togashi ends up dead on her apartment floor. Overhearing the commotion, Yasuko’s next door neighbor, middle-aged high school mathematics teacher Ishigami, offers his help, disposing not only of the body but plotting the cover-up step-by-step.

When the body turns up and is identified, Detective Kusanagi draws the case and Yasuko comes under suspicion. Kusanagi is unable to find any obvious holes in Yasuko’s manufactured alibi and yet is still sure that there’s something wrong. Kusanagi brings in Dr. Manabu Yukawa, a physicist and college friend who frequently consults with the police. Yukawa, known to the police by the nickname Professor Galileo, went to college with Ishigami. After meeting up with him again, Yukawa is convinced that Ishigami had something to do with the murder. What ensues is a high level battle of wits, as Ishigami tries to protect Yasuko by outmaneuvering and outthinking Yukawa, who faces his most clever and determined opponent yet.

When I first saw mention of Keigo Higashino's novel on the BookBrowse website, I knew I had to read it. I was intrigued by the description of the novel and am always eager to read mysteries set in countries other than my own.

I wasn't disappointed. The novel is engaging and fast paced--not to mention a great puzzle. It's not often I don't see the end coming in crime fiction, but I honestly had no idea what to expect as the events unfolded in The Devotion of Suspect X. Seeing the two geniuses at work, both Yukawa and Ishigami, as one tried to solve the crime and the other to hide it, I was reminded a bit of Sherlock Holmes.

My heart went out to Yasuko and her teenage daughter. And I liked Detective Kusanagi's tenacity and dedication to solving the crime. I found myself cheering him on while at the same time hoping the truth would not come out. Ishigami was the most interesting character, and perhaps the one that was more fully developed of them all. My feelings for him changed a couple of times as the story progressed and the more I got to know him. Yukawa was the most elusive of the characters. He clearly was an intelligent man, but I wouldn't have minded getting to know more about him.

Overall, I thoroughly enjoyed Higashino's The Devotion of Suspect X; so much so that it made my top ten crime fiction list last year. I hope to see more of the author's work in the future.

Source: I received the book for review from the BookBrowse First Impressions Program.