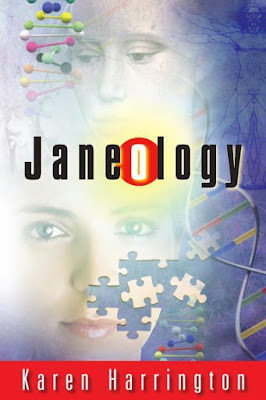 I stared at my attorney as he began his defense that I did not share the blame in the murder of my son. [first sentence]

It is difficult to know where to start in describing a book like Janeology. It is thriller-like on one level but also a bio-psychosocial character study of a woman who committed one of the most heinous crimes imaginable, that of murdering her own child.

Tom Nelson is on trial for failing to protect his twin children from their unstable mother. He hadn’t been present at the time of the drowning of his son and near drowning of his daughter. However, the prosecution and media are quick to lay blame at his feet. As the husband and father of the woman who murdered her own child, shouldn’t he have known she was a danger to the children? Jane's depression after the miscarriage should have been a clear sign, they said.

Tom struggles with guilt, second guessing himself and the choices he made. He knows he was not the perfect husband, but he loved his wife and had no idea she was capable of hurting their children. Author Karen Harrington adeptly captures his pain, anger and confusion, putting the reader right into Tom’s shoes.

Tom’s attorney suggests a radical strategy of defense—to map Jane’s genealogy in an effort to demonstrate a hereditary cause for Jane’s behavior, which would, therefore, absolve Tom of responsibility in a jury's eyes. Attorney Dave Frontella calls in a clairvoyant skilled in retrocognition to help prove his case. Mariah is able to read the past by using objects once owned by the dead.

Tom, Dave and Mariah begin their journey backwards in time, uncovering the dark secrets of Jane’s ancestors, going back several generations. Jane’s own upbringing is enough to raise questions about the impact that had on her eventual breakdown. The question of nurture versus nature arises in the novel. Although it really isn’t a situation of one or the other—but a combination of both nurture and nature, and the author does a good job of weaving these themes throughout the narrative.

Janeology is an intense and emotionally charged book that threads together family history to show one possibility of causation. Never in the novel did the author suggest this as an excuse for such behavior, only an explanation of how it might have led to such a tragic consequence. With the number of infanticide reports in today’s media,the author of Janeology deftly touches on a hot button subject, including the culpability of the non-offending parent. Karen Harrington is a talented writer and has crafted a thought provoking and intriguing novel.

You can learn more about the author and her book Janeology at her website.

Read what others had to say about this book:
B&B Ex Libris
Devourer of Books
The Inside Cover
The Literate Housewife
Maw Books Blog
Posted by Literary Feline at 9/10/2008 01:00:00 AM