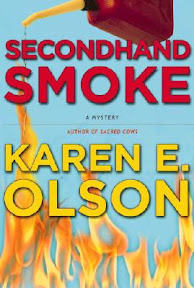 Reason for Reading: I enjoyed the first book the series and was in the mood to revisit Annie and her friends. This is my second selection for the 2nds Challenge.

Comments: It was with that first hint of smoke in the air that I finished reading Secondhand Smoke, the Santa Ana winds provoking and spreading a brush fire a few miles away. My husband opened the back door to let the dog out and the smell of smoke wafted in through the door. It somehow seemed fitting, especially given the opening sentence of the novel.

Annie Seymour, veteran crime reporter, could not have anticipated that she would be covering a story so close to home in Karen E. Olson’s latest novel. She is awakened by the smell of smoke and soon discovers that a popular Italian restaurant, Prego, was on fire. She immediately steps into her role as reporter and heads outside to get the story.

As the firefighters struggle to put out the fire and the police begin to look into the matter, a body is discovered in burnt out restaurant. Could it be the body of Sal, the restaurant’s owner? What would he be doing at the restaurant on Thanksgiving Day, when the restaurant should be closed? As Annie begins to unravel the clues, she finds much more than she anticipated. This time things are getting personal. Her father’s return to New Haven raises new questions, and Sal’s wife hiring Vinny DeLucia could prove to be a double edged sword of the personal variety. As the body count rises, the mystery of the chickens continues, the FBI and mob in town, and as threats for Annie to back off intensify, Annie is determined to get to the truth. Her own life could depend on it.

All of the old favorite characters are back: the sultry private investigator, the sexy police detective, Annie’s eccentric neighbors, and the cub reporter who will not take no for an answer. Readers get to see a softer side to Annie in Secondhand Smoke, although she is still one tough cookie. I love her dry sense of humor. She has a way of finding trouble—or trouble finds her—but she knows how to handle herself in a tough spot.

New Haven is the perfect setting for the series, a city with a small town feel to it. It has personality and, in a way, is very much a character in and of itself. I felt like I was right there on the streets, whether she was unlocking the door to her building, crossing through the park, snooping around, or picking up something to eat.

Karen E. Olson does it again. The mystery is entertaining and the characters quite intriguing. She has written a witty and compelling novel that leaves me eager for more.

Favorite Parts: Besides the very end of the book (which of course I can’t tell you about)? I enjoyed getting to know Annie’s father. He’s an interesting character who has that great mysterious vibe going for him.

I think my second favorite scene is Annie and Vinny’s visit to Dominic Gaudio. Like Annie, I found myself liking Dom quite a bit. He’s an intriguing character I wouldn’t mind running into again someday.

As my first favorite scene, it’s hard to describe without reading it in context, I’m afraid. It’s the second paragraph of the book. It struck me as quite funny and I earned a stare from a coworker who was in the break room when I laughed out loud. From then on, I had no doubt Secondhand Smoke would be fun reading.

Miscellaneous: Be sure and swing by tomorrow for Karen E. Olson's guest appearance!