Book to Movie Challenge Wrap Up 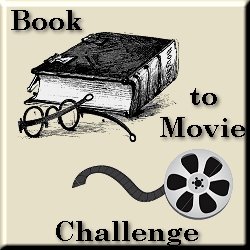 After books, movies are my second favorite form of entertainment. If I know there is a movie out based on a book I have read or intend to read, you can bet I will probably want to watch the movie. Although I prefer to read the book first, it is not a hard and fast rule. I can be flexible. At least, I am learning to be.

Callista came up with the perfect challenge: the Book to Movie Challenge, which involved selecting at least three books that were later translated into movies. Participants were not required to watch the movies based on the books, thankfully. I had hoped to do that before the end of the challenge on my own but was unable to do so.

I bit off more than I could chew with my recent challenges and had to do a little manipulating in order to give myself a passing grade. My crime was in substituting one book for another that met the challenge criteria after the challenge had begun. While I may not have played exactly by the rules, on a personal level I am counting it as a success. I accomplished what I set out to do, which was to read three books that were made into films, clear space off my TBR shelves, have fun in the process, and maintain my sanity.

My Book to Movie Selections:
Persuasion by Jane Austen
The Picture of Dorian Gray by Oscar Wilde
Bridge to Terabithia by Katherine Paterson

Of the three books I had the opportunity to read for this challenge, I was least impressed with Oscar Wilde's The Picture of Dorian Gray. I had seen the movie, The League of Extraordinary Gentleman, a couple of years ago and had since been curious about the mysterious Mr. Gray. I have no regrets about reading the book and, in fact, am glad I did. Still, the novel left a lot to be desired in the end. Unfortunately, this is one of the two books for which I have yet to watch the movie of, but I hope to remedy that soon.

I am not a huge fan of children's or young adult literature, I admit, and so it was with some reluctance that I approached Katherine Paterson's Bridge to Terabithia. Quite a few voices echoed the same sentiment, however, assuring me the novel was worth reading. And it was. It was a lovely story: sad, hopeful and full of meaning. The movie is next up on my Netflix list, and if I ever manage to watch one of the DVD's sitting around here so it can be returned, I may be able to get to Bridge to Terabithia before long.

Of the three books I read for this challenge, Persuasion is perhaps my favorite. I have joined the ranks of Jane Austen fans. I love her prose and characterizations as well as her seemingly simple stories with their complexities and moral themes. I was able to see the movie version of Persuasion and enjoyed it quite a bit.

I rarely have met a movie that is as good as its book, but that is a given. I never expect a movie to be. I can enjoy both in the form they are offered, make comparisons without feeling cheated, and often come away appreciating the book more than I might have before. There are quite a few unread books on my shelves that have been translated onto film, and many more yet to come. I had better get busy.