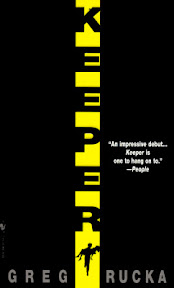 First Sentence: Much as I wanted to, I didn’t break the guy’s nose.

Reason for Reading: My husband is a Greg Rucka fan and recommended I try this series. I have read the author's Queen and Country novels, which I really like, and so I figured it was worth a try.

From the Publisher: In a heartbeat, a crowded auditorium or a city street can become a kill zone, where life and death are separated by a split second. For Atticus Kodiak, professional bodyguard, the object is to keep people alive, and there is no margin for error. Now Kodiak faces his toughest challenge: to protect a woman and her daughter from a killer with a fanatic agenda of his own . . .

Comments: The above description of the novel does little to describe the plot, but it is a nice introduction. Atticus is hired by a doctor at a women’s clinic to protect her and her daughter. Dr. Felice Romero is receiving threatening letters and has serious concerns for her and her daughter’s safety preceding the Common Ground conference, where people from both sides of the abortion issue will meet to discuss a way of coexisting and exercising their right to be heard without violence. The threats have become increasingly more vicious and the violence becomes even more of a reality when it hits close to home for the doctor and Atticus’ team. A rather outspoken and more radical anti-abortion group has made a point of being visible and heard over the more peaceful, law abiding protesters, and the FBI, NYPD, and Atticus and his crew are quick to take notice.

Atticus Kodiak is only in his late twenties, but he knows his stuff. He's definitely a man's man. If ever I needed a bodyguard and I had the money to spare, I would not hesitate to call on his team. They are professional and skilled while also being personable. They take their jobs seriously and yet are not afraid to have fun while doing it.

I admit that at first I was put off by the chain-smoking doctor in the first chapter of the book. Perhaps I have gotten too used to the no smoking rules inside hospitals. A quick look at the publishing date of the book reminded me of my place in time, however it was not a good first impression of Dr. Romero.

Author Greg Rucka takes a big risk taking on the subject of abortion in his first novel in the series, but he manages to do a decent job of presenting both sides of the issue, even though it is clear which side the main character falls on from the first page. This novel is action driven—one event leads straight into the next and there’s hardly a time for rest. By the time the job was winding down, I was just as exhausted as the characters. Greg Rucka’s approach is hard hitting and comes across both in his writing and the characters' actions. There was a lot of action and very little in the way of character development in this first novel, however, by the end of the novel, I felt like I knew Atticus fairly well.

Is this a series I want to follow? I will be visiting Atticus again, although I cannot say the series would count among my favorites. Tara Chase from Queen and Country is much more up my alley.

Favorite Part: Felice’s daughter, Katie, was like a ray of sunshine amidst all that was going on in their lives. One of my favorite scenes was when Atticus and Katie first met and she told him not to swear.

A character I hope to see if I read more in the series is private investigator, Bridgett. She is persistent, strong, and intelligent. My kind of woman.

Least Favorite Part: I did not much care for Katie's mother, Felice Romero. Besides the smoking in the clinic, she came across as a rather cold person. I imagine some of that had to do with all she was and had been going through, but the glimpses into her past and her interactions with her daughter were not enough to draw me to her.

Be sure and check out the author's website for a closer look at Greg Ruck and his many works.

Miscellaneous: Ted over at Bookeywookey could use your help with his homework! He is a graduate student studying cognitive neuroscience and is conducting an online study about the experience of reading. If you love filling out questionnaires and surveys as much as I do, I recommend you take a look.
Posted by Literary Feline at 11/19/2007 06:23:00 PM