The New
Can't-Wait Wednesday is a weekly feature hosted by the marvelous Tressa at Wishful Endings to spotlight upcoming release we are excited about that we have yet to read.
A new paranormal cozy mystery series! Yay! I cannot wait to dive into this one when it comes out. 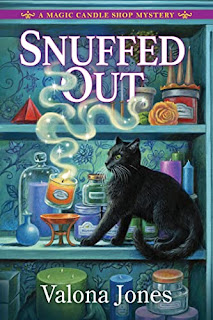 Twin sisters Tabby and Sage co-own a candle shop, but will it all go up in flames in Valona Jones’ series debut, perfect for fans of Amanda Flower and Bailey Cates.

30-year-old fraternal twins Tabby and Sage Winslow own The Book and Candle Shop in Savannah. Sage is hot-headed and impulsive while Tabby is calm and collected, making them the perfect partnership. When one of their customers is found murdered, from a blow to the head, that partnership is put to the test.

Blithe McAdam had been seen in a heated argument with shop clerk Gerard, which immediately makes him suspect number one. The twins are convinced of Gerard’s innocence and start digging into Blithe’s past. But no one is cooperating. The neighbor who found the body isn’t talking, medical examiner Quig won’t give any details about the autopsy, and nasty rumors begin surfacing about the drowning of Blithe’s father years earlier—evidence that could seal Gerard’s fate.

Tabby and Sage dig desperately for the truth. But it’s not only their friend who’s in peril. With the clock ticking, the twins find themselves in the grip of an unseen and deadly energy that has seeped into their midst—and in the sights of a ruthless killer. [Goodreads Summary]

Finding love while re-visiting the past can make for such a great story! Especially when the heroine is a romance novel connoisseur. It's sure to be a fun read! 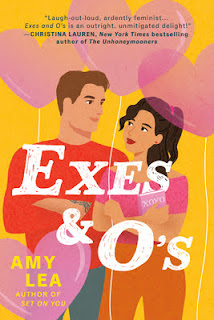 A romance novel–obsessed social media influencer revisits her exes on her hunt for true love in this romantic comedy from the author of Set On You.

Romance-novel connoisseur Tara Chen has had her heart broken ten times by ten different men--all of whom dumped her because of her "stage-five clinger" tendencies. Nevertheless, Tara is determined to find The One. The only problem? Classic meet-cutes are dead thanks to modern dating apps. So Tara decides to revisit her exes in hopes of securing her very own trope-worthy second-chance romance.

Boston firefighter Trevor Metcalfe will be the first to rush into a burning building but the last to rush into a relationship. Love just isn't his thing. When his new roommate Tara enlists him to help her reconnect with her exes, he reluctantly agrees. But Tara's journey is leading him to discover his own new chapter.

The more time they spend together, the more Tara realizes Trevor seems to be the only one who appreciates her authentic, dramatic self. To claim their happily-ever-after, can Tara and Trevor read between the lines of their growing connection? [Goodreads Summary]

The Old(er)
Carole of Carole's Random Life in Books has given me the perfect excuse to spotlight those unread books on my TBR in her Books from the Backlog feature, reminding me what great books I have waiting for me under my own roof still to read!
I have thought about pulling this book off my TBR shelf to read for quite some time, but, for some reason, keep putting it back. Will this coming year be its turn? 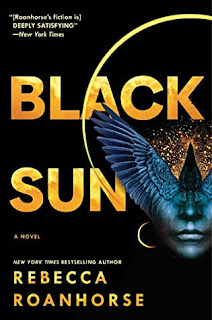 The first book in the Between Earth and Sky trilogy, inspired by the civilizations of the Pre-Columbian Americas and woven into a tale of celestial prophecies, political intrigue, and forbidden magic.
A god will return
When the earth and sky converge
Under the black sun
In the holy city of Tova, the winter solstice is usually a time for celebration and renewal, but this year it coincides with a solar eclipse, a rare celestial event proscribed by the Sun Priest as an unbalancing of the world.
Meanwhile, a ship launches from a distant city bound for Tova and set to arrive on the solstice. The captain of the ship, Xiala, is a disgraced Teek whose song can calm the waters around her as easily as it can warp a man’s mind. Her ship carries one passenger. Described as harmless, the passenger, Serapio, is a young man, blind, scarred, and cloaked in destiny. As Xiala well knows, when a man is described as harmless, he usually ends up being a villain. [Goodreads Summary]